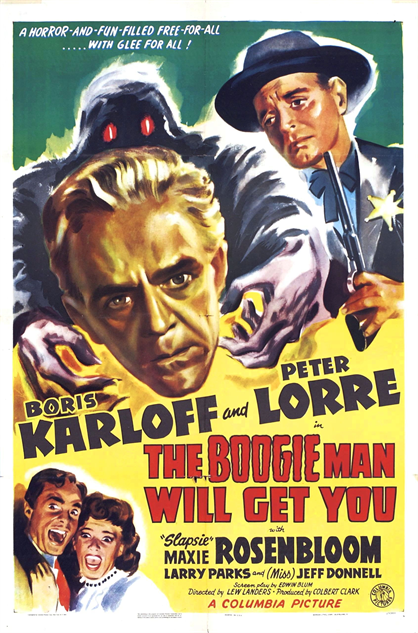 This film was quite enjoyable for what it was. A cockeyed optimist(Miss Jeff Daniels) buys a rundown colonial era inn with high hopes and decides to allow the current inhabitants, among them a scientist working on a device that will help the Allies win the war(Boris Karloff)and an old woman who obsesses about chickens, to stay on. Her bumbling ex-husband has followed her. The scientist is soon joined by the sheriff/coroner/justice of the peace (and purveyor of baldness cures),played by Peter Lorre. The big question is: Is there are or aren’t there a room full of corpses in a secret room off the wine cellar? They have been experimenting on travelling salesmen who happen by the house,using the standard bulb- and- helmet type of contraption that should be familiar to moviegoers. Lorre’s character packs a huge pistol and keeps a Siamese kitten in his pocket, claiming that “she has a incredible sense for crime and corruption.”