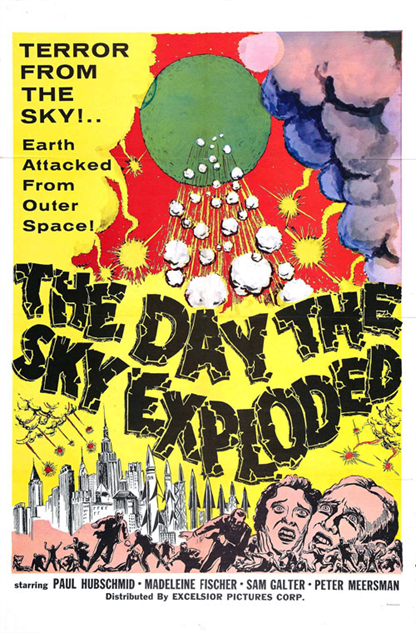 This little Italian oddity offers the drama of a world-wide disaster and the themes of international cooperation which were better capitalized by the Star Trek franchise and several similar disaster films of more recent vintage.

The film is somewhat unique for its unusually jerky pace, clever low budget effects, odd use of stock footage, and strange cinematography. The Day the Sky Exploded begins as if it is going to be a space-flight adventure, but instead treats the space flight in a realistic, almost mundane manner, before proceeding to reveal the real plot – concerning the meteors. The astronaut (nicely played by Hubschmidt) is forced to eject from the nuclear powered rocket and the rocket flies off to …. where? before you know it, a cluster of meteors, probably blown off of some planet or perhaps the moon, is threatening to destroy the earth.

Some of the ‘scientists’ allude to unknown religious beliefs and seem to think that some great big meanie out there has it in for us because we’ve ventured off our planet in a serious way for the first time (like the perspective offered by Star Trek First Contact inverted). The plot begins with the rocket launch and a great feeling of optimism and then proceeds into panic, and then a feeling of inevitable doom, as nobody seems able to come up with an adequate solution.

There are also some amusing but really unnecessary romantic elements and some decent character development which help to round the film out in a general way. The acting is generally good, but there are a few really odd moments where people seem either too calm or absurdly evocative given the circumstances they are dealing with. There are also a couple of bad moments for the script, which may be a result of translation problems from the film’s native language.

I have noticed a lot of people making fun of the special effects. Sure, the dozens of stock footage clips of rockets being launched is over-done, and yeah, some of the scenes showing people and cars moving around in the parking lot of an unidentified building are kind of funny, but I actually enjoyed the primitive but creatively filmed scenes of asteroids and explosions. They were, at the very least, more artistically designed than some of what appears in contemporary films with similarly low budgets.