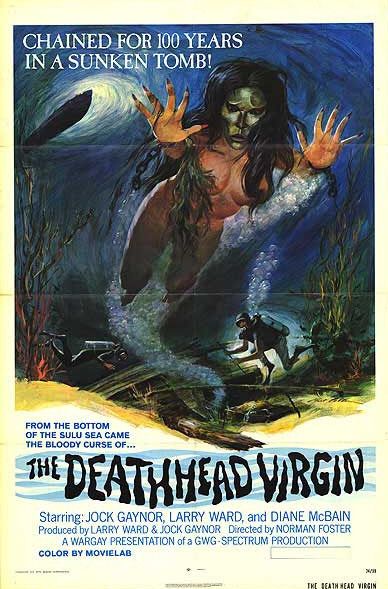 Unrenowned U.S./Phillipines co-venture involves an ancient sunken vessel being found by divers. Inside the ship is a treasure, as well as the manacled skeleton of a princess. When the skeleton is heedlessly released from it’s chains, the bones transform into a naked girl wearing an ugly witch mask over her face. As you’ve probably guessed, nearby island natives begin to die mysteriously, and some suspect that the ages-old curse of the Deathhead Virgin is to blame. Things aren’t necessarily all that they seem, however, as the story takes some hairpin turns during the final-third.

THE DEATHHEAD VIRGIN is a fairly watchable and not inefficiently formulated low-budget horror-drama(and Diane McBain is gorgeous in a slingshot bikini). Still, there’s nothing of any real distinction to make this recommendable(unless your dying to see what is possibly the world’s longest spread of opening credits). It’s not at all a good film, but it is a wee bit better than I had anticipated.