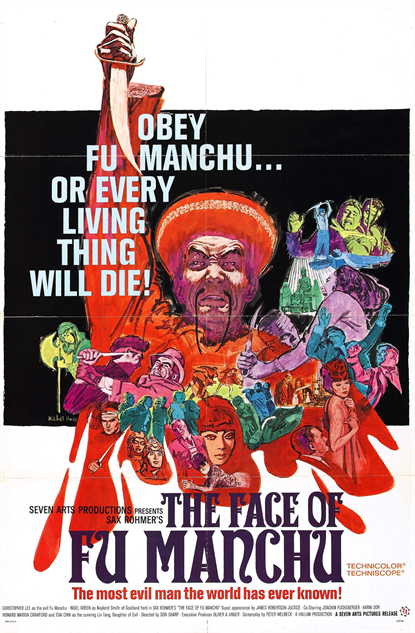 Based on the character originally envisioned by British author Sax Rohmer, Christopher Lee made a total of five appearances in the 1960s as arch villain Fu Manchu. This entry (the first in the series) is by far the best, closely followed by the second ‘Brides of Fu Manchu’ (another Region 2 only DVD release). What makes this entry so enjoyable is the wonderful Nigel Green as Fu Manchu’s greatest nemesis – Nayland Smith of Scotland Yard. In fact it is in the opening minutes of this movie that we see Smith invited by the Chinese government to witness the execution of Fu Manchu. Fast forward a couple of months and Smith is sturdy in his belief that Fu Manchu survived and is behind a series of grisly crimes in western Europe. Then when a professors servant is found murdered in the same manner in which Fu Manchu’s followers had practiced, Smith becomes even more convinced that he is up against the evil genius. Through a series of machinations Smith learns that the professor has been kidnapped by Fu Manchu and is being forced to make a toxin that could wipe out most of the western world. Of course (in a plot device also used in the following ‘Brides of Fu Manchu’) the professors daughter has also been captured and is being used to comply the professor to complete his task. Directed with skill by Don Sharp this movie is fast-paced enough to overlook the plot holes and colorful enough to keep the fun factor umped up to the ultimate degree. It’s a visual feast and the movie is also helped by a tight script and some well drawn characters. I grew up watching these movies on British television and my memories did not disappoint me. Also notable is the inclusion of one-time Bond girl Karin (You Only Live Twice) Dor ho turns in a strong performance as the professors daughter. This is an ultimate Saturday afternoon movie to be watched relaxed in a recliner with a bag of popcorn in one hand and a soda in the other, all the while reveling in every outlandish moment.