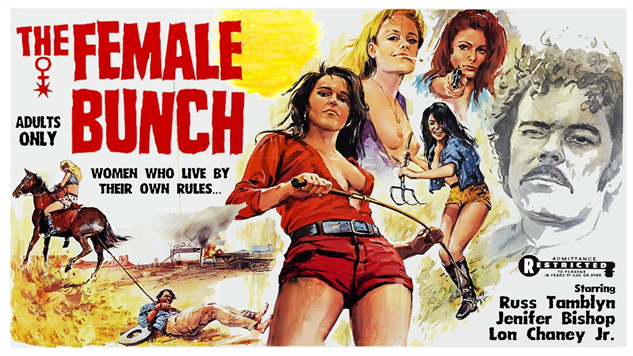 “The Female Bunch” was completed in Aug 1969 under shooting title “A Time to Run,” even more brutal and shocking than director Al Adamson’s breakout success, “Satan’s Sadists,” on Western locations in Utah and the Spahn Movie Ranch in Chatsworth, at the very time the Charles Manson family was committing their most heinous crimes. The new title was inspired by “The Wild Bunch,” going even further in its violence and nudity, even a full frontal shower scene, never topped by Adamson. A modern story about man-hating women living on an isolated California ranch, enabling them to run heroin from across the Mexican border. The sight of the bunch on horseback, constantly riding hither and yon, quickly grows tiresome, and even their sexual antics prove boring under Adamson’s out of focus direction. Future HEE HAW girl Jennifer Bishop had an extensive exploitation career in Adamson films, “Blood of Dracula’s Castle,” “Horror of the Blood Monsters,” and “Jessi’s Girls,” but hasn’t the acting chops to truly convince as Grace, the ‘queen bee’ of this hive, and none of the other females stand out. The nominal male leads are Lon Chaney and Russ Tamblyn, only around long enough to justify their prominent billing, Chaney billed with the ‘Jr.’ for the only time since the 1942 Universal short “Keeping Fit.” Tamblyn only arrives at the midway point, getting killed in glorious fashion with a pitchfork to the groin after being branded on the forehead by Grace. As Monti, aging former stuntman, Chaney is the only male working on Grace’s ranch, believing that she’ll eventually respond favorably to his amorous advances, only to be knocked out, tied to the back of a horse, and allowed to be dragged off to certain death. With only 6 1/2 minutes screen time, it’s a disappointingly small role for the actor’s last, but even worse is the quality of his cancer ridden voice, reduced to a terrible rasp, even when he’s supposed to register emotion. There’s a certain home movie atmosphere in the way that Adamson unflatteringly films his star, happily guzzling a bottle of vodka and spitting it out!