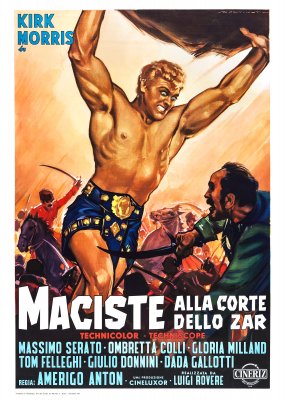 A most cruel czar is ruling over in Russia around the time of Ivan the Terrible. He’s like all rulers greedy for riches and he sends an expedition into the Urals where it’s reputed there’s an ancient civilization that ruled there once and a lot of loot. The expedition finds some treasure all right of the usual kind. But they also find a sleeping muscle dude in a sarcophagus. A little sprinkle on the pecs and Kirk Morris as Maciste comes alive.

And being the peplum hero he is Maciste takes up the people’s cause and you know what’s going to happen. I’m sure this was the wish dream of many a poor peasant serf under any number of czars.

Nothing terribly special here except for a classical hero of the ancient world now working in medieval Russia. The juxtaposition of historical eras is what makes this peplum epic stand out. After that the usual muscle flexing and bad dubbing.