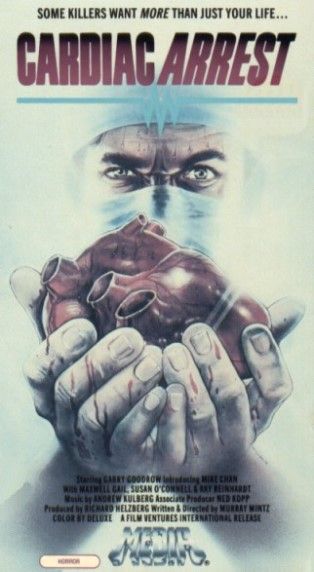 CARDIAC ARREST hit video shelves and was being sold as a horror movie with a pretty good cover showing an evil doctor holding a heart. I’m going to guess that this film was put into theaters as a detective story but it flopped so the producers tried to make their money back on video by passing it off in the slasher era. Sadly, the film is just really awful from the start and has very little working for it.

I will say that the idea of an evil doctor, hearts being stolen and sold is a pretty good idea but sadly nothing is done with it here. I really thought this was a poorly made movie right from the start as it lacks any real tension and there’s never an atmosphere or anything else built. Even worse is how awful some of the performances are as you’d really think that they filmed a rehearsal because the performances are that bad.

The mystery of who the killer is was well kept but at the same time the viewer is so bored by the film that by the half hour mark they won’t even care who is doing it. The lead detective isn’t very interesting and neither is everything that happens for him to solve the case. With the mystery side of things not working you’d hope for some good kill scenes but that doesn’t happen either as we usually just see the aftermath so those expecting gore or violence should go somewhere else.

CARDIAC ARREST is a film that just doesn’t work and should only be viewed by those wanting to see the bottom of the barrel.