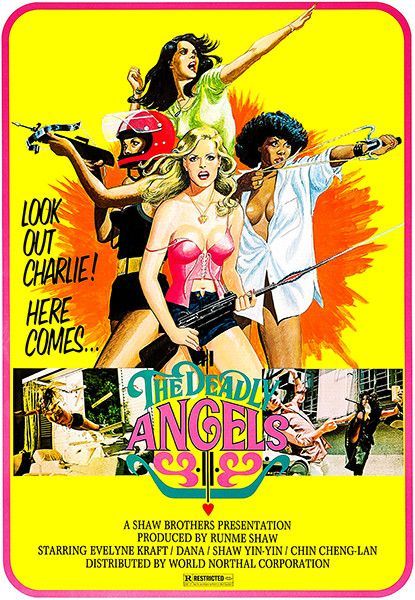 A vicious gang of jewel thieves is operating in Hong Kong. Using a cabaret as a front they are smuggling jewels all over the orient, and leaving a trail of dead women who acted as couriers. After a jewel robbery leaves a good number of people dead a special all female unit is formed to see if it can get the goods on the robbers.

This Shaw Brothers film is a mess. First off other than the robbery and a training exercise there is really no action for the better part of an hour (if you’ve seen the trailer your seeing the training exercise and the final battle cut together). When the action finally happens its basically a few short fights followed by a very long battle that caps the film. Its all great stuff of the highest order, but by the time you encounter it its almost too little too late.

The film also makes very little sense outside of the gem smuggling central theme. There’s a side story about one of the bad guys who’s a knife throwing (as in on stage) sadist with the women but it really doesn’t go anywhere. One of the police women is dating the son of the dead owner of the jewelry store that was robbed but that seems more like an after thought than anything real. By the time the final battle happens odds are you’ll just be watching for the fights, I know I was.

This is only worth seeing if you come in in the middle since thats when all of the fighting starts. It will also give the illusion that the movie makes sense since you can assume you missed something (which you haven’t).

For martial arts complete-ists only.

FYI- Two points to note, the trailer for this film seems to contain different footage from the film. It maybe the result of the print I saw which was dubbed into English and subtitled in Greek, but I didn’t see anyone drive a motorcycle through a wall.

Secondly early on when the all female unit is formed we see several photographs of the dead couriers. One them is of a woman who is killed later in the movie by the knife wielding sadist.