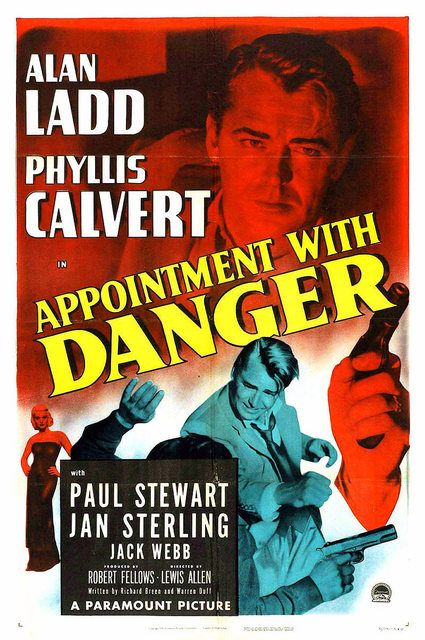 A good, run-of-the-mill crime story. It’s more a heist film than a true noir, and it has a popular twist of featuring a government cop as the lead character. There are several FBI films like this (they start with a shot of government building and have a serious narrator or title card give the context), but this is the only one I know of about the U.S. Post Office police.

Alan Ladd is a solid actor, in urban crime films or in Westerns, but he’s never quite inspiring or memorable, and so the movie is hampered from the start. On the other hand, there is a slew of interesting secondary characters, and some are real characters (like the ever-impressive Paul Stewart, who had his real start in “Citizen Kane”). We get to bomb through some great sets and locations (including the waterfront), and the photography by John Seitz (one of the best, see “Sunset Blvd.” and “Double Indemnity”) is great. The editing seemed a little sudden at times, almost as if this was shortened version (it wasn’t, as far as anyone has noted), but you have to pay attention a couple times to follow what happens. In a way, I think they expect the audience to know the usual twists of this kind of plot, and if that helps explain its fast cutting, it also reveals a kind of formula behind it all.

See it? Yes, of course. It’s great in particular ways.