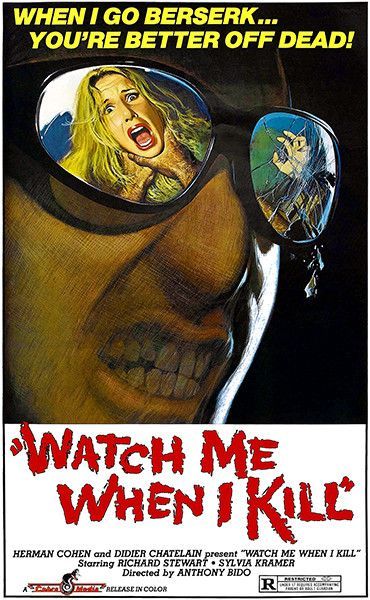 Dancer Mara (Paola Tedesco) stops off at a pharmacy, unaware that the owner has just been murdered. When Mara tries to enter the shop, the killer, still inside the premises, tells her from behind the door that the place is closed. Fearing that the woman might be able to identify him from his voice, the murderer adds Mara to his list of intended victims, all of whom share a dark secret. Meanwhile, Mara’s close friend Lukas (Corrado Pani) puts his life on the line to help.

Directed by Antonio Bido, Watch Me When I Kill (AKA The Cat’s Victims) is a densely plotted giallo that requires concentration, but which rewards the attentive viewer with a satisfying mystery, several well executed moments of tension and a few deftly handled death scenes. Visually, the film lacks the style of a Bava or Argento movie, but compensates somewhat with a fantastic pounding score by Trans Europa Express, who sound more than a little like Goblin in their prime and who add tremendously to the atmosphere.