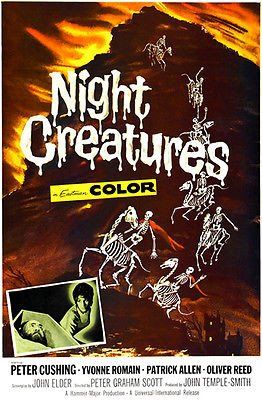 While Britains’s Hammer film company made their reputation with remakes of the hoary old horror staple potboilers such as their Draculas and their Frankensteins, their true strength was in the creation of relatively small budget genre films that shone with matchless originality and talent. “Captain Clegg” is Hammer Films at their very best.

The story concerns Captain Collier of the English Customs Service arriving in a small seaside town in search of smugglers and of his old arch nemesis, the pirate, Captain Clegg. he soon discovers that things in the village are not as simple as they seem. For a start, there are the “marsh phantoms” which are more than capable of frightening people to death, and then there is evidence of large quantities of illegal rum. The plot thickens as Collier seizes the trail and as the villagers fight back in ways quite unexpected for people familiar with this kind of story. Captain Clegg is a rare blend of horror, suspense and swashbuckling comedy that would not be emulated until 2003’s “Pirates of the Caribbean: Legend of the Black Pearl.” The plot is full of twists and evil jokes and never lets anything get in the way of what is after all, simply a rollicking good yarn.

The acting is frequently nothing short of breathtaking. Peter Cushing as the Reverend Doctor Blyss is at the top of his very considerable form and delivers an masterful performance. “Doctor Blyss” is a fully rounded and complex antihero character of undeniable magnetism and amazing power. A young and almost unbelievably handsome Oliver Reed delivers an arch and catlike performance that with have viewers rolling in the aisles on one hand and swooning on the other. Michael Ripper delivers what may have been the performance of his career, his character, “Jeremiah Mipps” is worthy of the great Leonard Rossiter at his best.