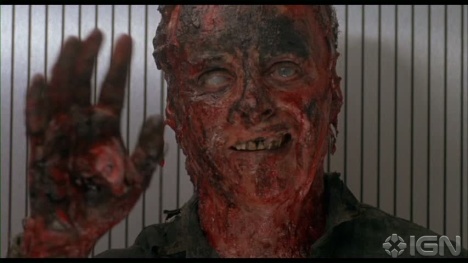 Visiting Hours came completely out of nowhere. There’s not much info out there about this Canadian slasher, which actually helped create a sense mystery and terror to the narrative. The movie starts off not unlike The Howling, with a journalist being terrorized by a serial killer. She survives the ordeal only to have the killer return to the hospital, over and over again, in an attempt to find her and finish what he started.

Michael Ironside plays the killer, and it’s easily one of the finest performances of his illustrious career. His intensity is dialed up to a whole new degree as he brutally maims and murders his innocent victims. It’s terrifying and disturbing yet impossible to look away. And unlike most slashers of the era, he’s almost the main character. We see his plans unfold. We see him sneak into the hospital. We see him set his traps. It’s in this creepy twist that the film finds it footing. Despite a slightly overbearing, clunky message about feminism, genuinely terrible editing, and plenty of logic errors – the police and the hospital seem completely incompetent, plus the guy leaves fingerprints everywhere, and several bystanders spot him after his kills – Visiting Hours is a shockingly scary, panic-inducing film you won’t soon forget.

It’s a shame this one never got much acclaim. It was tossed on the “video nasties” list in the UK, but it’s never gained the cult fame of other slashers out there. For a fine complement, also check out Alone in the Dark, a little-known 1982 slasher featuring Jack Palance (yeah, that Jack Palance).