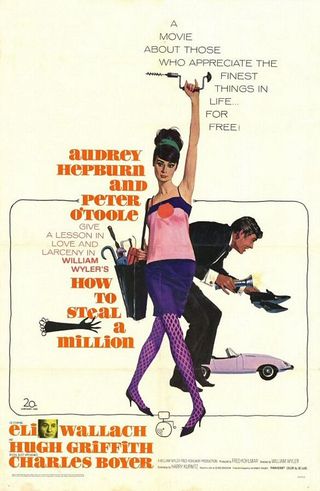 So D.B. Cooper is back in the news. Forty years ago, a well-dressed man hijacked a Boeing 727, extorted $200, 000 in ransom money, then parachuted into uncharted terrain, never to be seen again. Last week’s newspapers contained fresh speculation as to his true identity, but the mystery of D.B. Cooper remains intact. The question is: why has D.B. Cooper become a folk hero? Why do we cheer for rogues who take what doesn’t belong to them, and get away with it?

For an easy-on-the-brain summer treat, I just saw Topkapi, 1964’s comic gem about a gang of thieves bent on spiriting an emerald-encrusted dagger out of a Turkish museum. Topkapi was directed by Jules Dassin, who in Rififi (1955) had given us a dead-serious take on a jewel heist. Here Dassin is in a more light-hearted mood, reveling in the exotic beauty of Istanbul and in the vivid eccentricities of his actors. These include the smooth-as-silk Maximilian Schell and the plump, dotty Robert Morley, along with Dassin’s own wife, Melina Mercouri of Never on Sunday fame. Her eyes sparkling with mischief, her voice a rusty purr, her laugh (an important plot element) throaty and infectious, she is a creature to love, but not to trust. When the film was released, most kudos went to Peter Ustinov, whose portrayal of a “schmo” with a fear of heights won him an Oscar for Best Supporting Actor. I was also fascinated by Gilles Ségal as an aerialist whose ability to do remarkable things while hanging upside down is the key to the theft.

I won’t spoil the ending, but it strikes me that there are two kinds of heist movies: those in which the rogues make off with their ill-gotten gains and those in which (despite all the planning, all the scheming) the theft goes awry at the very last second. We love heist movies partly because of the ingenuity of their plotting. I think we love them too because, in a world where mediocrity abounds, it’s a pleasure to observe true expertise: the nimble-fingered safecracker, the mechanical genius, the chameleon who can impersonate anyone. And, of course, there’s the lovely fantasy of getting rich the easy way (though it never turns out to be so easy in the end).

Why don’t we resent characters who simply take what they want, instead of struggling like the rest of us working stiffs? Because, secretly, we’d like to do the same. And many heist-type films stack the deck by making the crime seem victimless. We’re not terribly bothered if a bank or a big Vegas casino gets ripped off. In The Sting, the guy who gets fleeced is so despicable that we’re free to regard the con-men played by Newman and Redford as heroes. Sometimes the thieves and con artists appear to be righting a wrong, so that robbing the rich becomes an essentially virtuous act.

I have a soft spot for William Wyler’s sparkling How to Steal a Million, in which Audrey Hepburn must break into a museum to steal a statue her family already owns. Here we don’t need to feel the slightest moral qualm: Hepburn turns thief not to amass riches but rather to save her father’s reputation. How nice that along the way she finds love. This is one film (among many) in which crime definitely does pay, and the audience is the big winner.