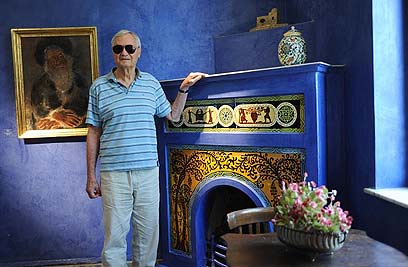 Hollywood is a weird dream that Roger Corman dreamed once upon a time. In 1955, with a degree in industrial engineering and no movie background whatsoever, he directed his first film, Swamp Women. It was a terrible film. Like most of Roger Corman’s films. Yet it seems this makes no difference if you produce and direct some 500 films in less than 60 years, and continue this also at age 82.

They call him the King of the B-movies, the maestro of exploitation, the man who invented trash. A legend has developed around the films he directed, photographed and edited in two days. Mainly, Little Shop of Horrors. This also makes no difference. Because Roger Corman not only dreamed the new Hollywood; he raised it on his knees. He invented it.
Anti-Semitism
Hollywood against Israel / Giulio Meotti
Op-ed: Modern-day art world home to Israel haters, takes pleasure in romanticizing terrorists
Full Story

Martin Scorcese, Francis Ford Coppola, James Cameron, Jack Nicholson, Robert DeNiro, Jonathan Demme, Peter Fonda, Peter Bogdonavitch, were all his disciples; this is only a partial list of the giant talents who received their first chance in the profession from Corman. Some of them did not even know that they wanted to make films before they met him.

Corman is a man who asks you if you know how to swim, and when you answer no he throws you in the water, says Bogdonavitch in Corman’s World, an impressive documentary by Alex Stapleton that will be screened Friday at the Tel Aviv Museum, in the framework of the Docaviv documentary festival. This is perhaps the most comprehensive attempt to give Corman the respect and place he deserves in the history of the dream industry.

Corman is known for his amazing ability to produce films cheaply and quickly, guerilla-style. Ron Howard recollects, for example, how for the need of photographing race scenes in The Fast and the Furious in 1955 Corman took some sports cars for a test spin from various automobile shops, removed their windows and returned them in a few hours without anyone suspecting a thing. “You will do good work under my conditions,” he told young Howard on that set, “and you will never need to work for me again.”

Oscar for lifetime achievement
But Corman’s true greatness is marked indeed in the content of his films from the mid 1950s to the 1970s, some incredibly bad, and some surprisingly good. These creations foretell the revolution.

Long before Hollywood woke up, Corman understood the gap between conservative cinema that ruled the screens then and what the public really wanted to see. Although he was personally gracious and amiable, restrained and polite, he immediately connected to the social movements that pervaded American culture in the 1950s.

Against the backdrop of the youth revolution, the rise of Elvis and the development of counter-culture, Corman developed over two decades cinema that is all sex, drugs and rock n’ roll (don’t miss The Trip, an experimental film about LSD that was scripted by Jack Nicholson) brimming over with left-wing social messages, and covered over with action, violence, science fiction and plastic monsters.

In brief, there is practically no blockbuster that does not owe Corman a salute.
This is precisely what makes Corman’s an important documentary that frames Corman’s tremendous contribution to popular cinema in context.

Finally his producing earned Corman an Oscar for lifetime achievement and the recognition he deserves. Until that moment, Hollywood seemed to shun him, embarrassed by his camp heritage and by his criticism over the tremendous amounts of money that Hollywood invests in films. “$35 million for a movie is an astonishing waste,” he said at the beginning of the 1980s, “it is possible to renovate a whole poverty stricken neighborhood for such money.”

Toward the end of the film are Nicholson’s tears, as the journey down memory lane suddenly fills him with emotion, and also the viewers. With all the admiration, he says, “Corman must know that we really love him.” And anyone who really loves cinema from Hollywood can only agree.