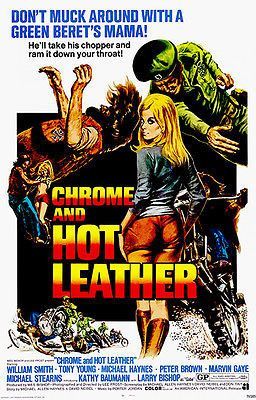 As biker movies go, Chrome And Hot Leather is unusual. Biker films, tended to highlight the wild lifestyle of the outlaw biker culture, as desirable. But this film doesn’t glorify bikers. In fact, the military establishment, and their straight-arrow values, are the focus of heroism in this movie.

It’s true that by the time this film was made in 1971, outlaw bikers were no longer romanticized like they had been just a few years earlier, by the youth culture. Still, it’s hard to believe that during the Vietnam war era, when antiwar sentiments were strong, Hollywood goes and makes a film with the military as the good guys.

The plot centers around a Green Beret Sgt. named Mitch, who is headed home after his tour of duty in ‘Nam. He’s engaged to be married to a beautiful young woman, and ready to begin a new life as a civilian. Meanwhile, as his fiancé and her friend are out for a drive, they’re harassed by a biker gang. This results in an accident, that kills the two women. Mitch, along with a few of his army comrades, are determined to catch the bikers who are responsible for killing his fiancé.

Actor Tony Young infuses the character of Mitch with a steely, square-jawed resolve, to avenge his fiancé’s murder. The great R&B singer Marvin Gaye, appears as Mitch’s Green Beret buddy. Marvin does an adequate job in his role, but he’s a much better singer than actor. William Smith plays the biker gang leader. William has appeared in more biker films over the years, than probably any other actor. With his burly, threatening appearance, Smith seems like he was born to play badass outlaw bikers.

Mitch and his Army pals work together as a cracker-jack military unit, to accomplish their mission of nabbing the biker gang. The way Mitch and company carry out their quest for justice, reminds me of the fictional TV military group, called the A-Team. I wonder if the creators of the A-Team, were inspired by this movie.

Chrome And Hot Leather isn’t the best biker film around, but it’s different. For fans of biker movies, this one won’t validate the bikers as cool. This movie would be most enjoyable for those that admire the military, and how it’s members triumph over the bad guys.