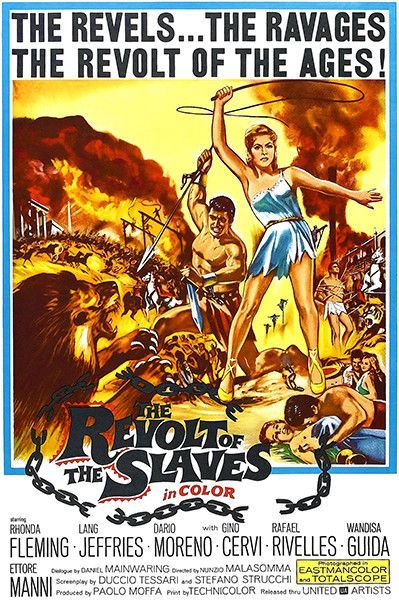 Rhonda Fleming would shortly be ending her big screen career and would henceforth do roles mostly for television. I’m sure that Revolt Of The Slaves might have had a lot to do with that decision. It was a project of her’s and the man whom she would soon marry, Lang Jeffries.

This is a Christian martyr film along the lines of The Sign Of The Cross and Quo Vadis. But Fleming’s film takes place much later than the early Empire years of those classics. She plays Fabiola who in real life had an interesting story to tell, but this isn’t it.

Nor for that matter are the stories of Sebastian and Agnes two other noted martyrs. The lives of Fabiola, Sebastian, and Agnes inter lap chronologically, but they apparently never knew each other unlike how The Revolt Of The Slaves tells the tale.

Jeffries plays Vibio a Christian slave who Fleming takes one look at stripped down and in the true DeMille tradition of sex and gospel falls for him. But Vibio missed the course in turning the other cheek. He’s going to fight for his fellow believers in the way he was trained as a gladiator.

One fascinating bit of history that I will have to look up and change my review if it is correct, but this is the only Peplum film I’ve seen that has the Romans using black African mercenaries. Emperor Massimiano played by Dario Moreno apparently doesn’t trust his Roman Guards and he’s got a private army of black guards whom he uses for things like suppressing the heresy of Christianity.

They have a white commander, a sniveling little ferret of a human being played by Serge Gainsbourg. He has a death scene to beat all and I won’t say another word. You should see Revolt Of The Slaves for that alone.