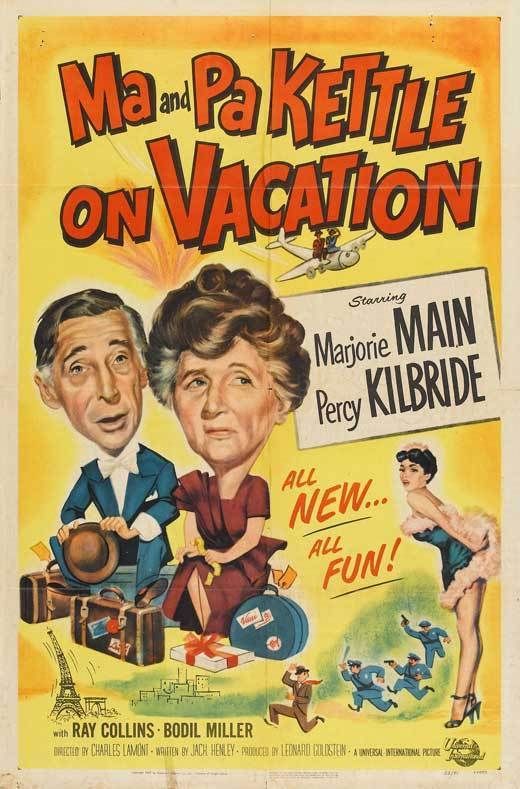 The Ma & Pa Kettle films were about a very backward but nice country family*. Early on in the series, the family wins a contest–a fully equipped modern home. Up until then, they’d been living in a tumble-down shack on a farm. They certainly were coming up in the world. However, with “Ma and Pa Kettle on Vacation”, they jumped to a whole new level. Now they are world travelers–invited on a posh vacation in Paris. Talk about straying further and further from the original premise.

This film begins with Ma and Pa being invited to go with Mr. and Mrs. Parker to Paris–and it’s all paid for by the Parkers. If you don’t remember, in an earlier installment of the series, the Kettle’s oldest son married the Parker’s daughter. The Parkers and Kettles are complete opposites but the Parkers, inexplicably, seem to like them! During the trip across, Pa gets to talking to a man on the airplane. This guy asks Pa to hold on to a letter for him–and dumb ‘ol Pa agrees! However, the man never returns for the letter…because he’s dead! It seems that they’ve stumbled into a nest of spies!

This is a VERY contrived movie and ample evidence that the series had jumped the shark. In other words, they had strayed so far that the series would all be downhill from now on. Despite this, it’s a decent and modestly entertaining movie. If you like the series, it’s well worth seeing. If not, then try the older ones first–they are much better.

*In their first incarnation, the Kettles were homicidal maniacs!!! Talk about inconsistent! However, this persona was soon abandoned and they soon became very neighborly!