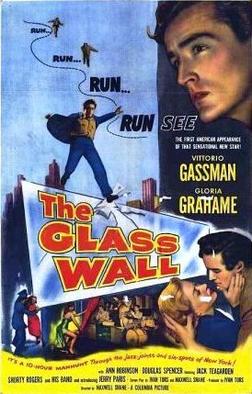 Peter ( Vittorio Gassman) and Maggie (Gloria Grahame) show what can happen to immigrants that arrive here without proper papers. He has a loophole that he thinks he can use to be admitted to the country, but without enough information, this plan isn’t going to work… Grahame had JUST made “the Bad and the Beautiful, which won her an Oscar; she often played the rough, gritty, sexy type that seemed to find trouble of some sort. Keep an eye out for Jerry Paris (we all know him as Dick Van Dyke’s next door neighbor/dentist), directed a whole lot of TV shows in the 1960s and 1970s. Here he plays “Tom”, someone from Peter’s past who can help him if he can be located. Also some great photography (real or stock footage…?) of the crowded, rough and tumble, glizty well-lit Times Square from the 1950s, before Disney bought the whole block. A good, well told story, even if there are a couple of unbelievable moments here and there, like in the taxi cab…. Written and directed by Maxwell Shane, who mostly stuck to writing, but also produced and directed a few things from 1930 – 1960.