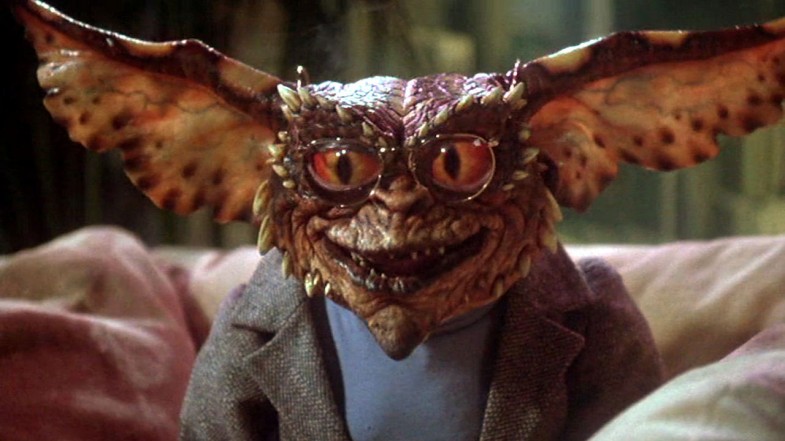 People didn’t get Gremlins 2: The New Batch when it was released in the summer of 1990, six years and a week after its blockbusting predecessor. It grossed less than a third of the original’s box-office take ($41.4 million versus Gremlins’ $148.1 million). Horror-hater Roger Ebert, who actually liked Gremlins and gave it three stars, gave Gremlins 2 two and a half and wearily wrote, “[Gremlins] was a superior B movie and a lot of fun. Gremlins 2 The New Batch is a meditation on sequels and, like most sequels, it’s a faded imitation of the original.” Its IMDb score (6.1) is a whole point behind Gremlins’ (7.1).

It’s a shame that Gremlins 2 is best remembered (if it is remembered at all) for subverting expectations as a sequel to a beloved and profitable (in box-office receipts and merchandising, alike) ‘80s relic. The much more impressive subversion is within its engagement with its source material. Like gremlins to machinery, director Joe Dante and producer Michael Finnell gleefully pull apart the makings of what they created six years before. The result is nothing short of a riot.

In the commentary on the Gremlins 2 DVD, which has been ported over to its Blu-ray (out this week), Dante calls Gremlins 2 “one of the more unconventional studio pictures ever. And if it weren’t for the fact that the studio was in dire need of another one of these movies to put into the cans and send to the theaters, I can’t conceive of us getting away with this.” He took advantage of that dire need by taking the piss. On that same commentary, Finnell recalls Warner Bros. head Terry Semel telling them, “Just come up with something. Whatever you want. It doesn’t matter. Between 90 minutes and two hours, call it Gremlins 2, and we’ll make it.”

Dante, Finnell and their screenwriter Charlie Haas had the studio by the balls and then kicked their movie in them for 107 minutes. Empowered by carte blanche, the team “ragged mercilessly” (Dante’s words from the commentary) on Gremlins in a blur of mocking references. The most overt happens when protagonist Billy (Zach Galligan) summarizes to the uninitiated the gremlin-fueled hell that’s about to be unleashed in the New York, Trump Tower-esque super-building in which the film is set, they guffaw in his face. They are laughing at, not with his experience in the first movie. He runs through the gremlin rules (don’t get them wet, avoid bright light and do not feed mogwai after midnight), and someone pokes a whole through the entire logic of the franchise by noting, “It’s always midnight somewhere!” And then a gremlin crashes through an electrical board, poking a hole right back.

The film follows the loose structure of the original (one adorable mogwai begets several unruly ones, who then beget little green killers on a rampage) but goes haywire at every beat. My favorite example finds Phoebe Cates’ Kate attempting to hit the emotional crescendo she did in the first film when she described why she hates Christmas by recounting her father’s ghoulish death from getting stuck in the chimney he was trying to come down, dressed as Santa Claus. She launches into why she hates Presidents Day (some guy in an Abe Lincoln beard and hat once accosted her in a park) and she is guided off screen, everyone rolling their eyes at her and her predilection for schmaltz.

Gremlins 2 isn’t entirely irreverent: Gizmo is still a sacred creature his entire existence an ode to the adorability of ultra-thick eyelids and bat-wing ears. The movie is, in fact, so in love with that cooing ball of fur that it treats him like a deity who can never be too cute. Within 20 minutes, he’s given his own unironic dance sequence in which he bops around to Fats Domino.

There is special attention, too, paid to righting some wrongs of the first one: the main gremlin is named Spike, which is the name I remember many kids erroneously using to refer to the antagonist of the first one, Spike. Most importantly, though, Billy gets to keep Gizmo in the end, don’t-mess-with-nature message be damned.

And damned it is – Gremlins 2 is an endorsement of messing with nature just for shits and giggles. This comes explicitly, as the gremlins break out into the Clamp Center’s genetic testing lab and ingest chemicals that transform them even further. We get a spider gremlin, a veggie gremlin, an electrical gremlin, a female gremlin (which really throws a kink into the entire species, which up until that point was just a colony of dude monsters and/or butch lesbian creatures who don’t need distinct genders since they reproduce by coming into contact with water) and a genius gremlin, who’s existential and references Sontag.

But it’s the implicit messing with the nature that has been set out for this film that is most satisfying. Gremlins 2 is more than a mere shitting-on. The heart that comes through at the very end when Billy, Kate and Gizmo stroll off into the mogwai-friendly sunset is actually there all along. Gremlins 2 takes the often hard-to-telegraph stance that you can poke fun at something as a way of celebrating it. There were rumblings of this affectionate-mocking aesthetic elsewhere at the time Gremlins 2 was released (Julie Brown’s Just Say Julie was the apotheosis of this sensibility), but it wouldn’t fully come to pass as a widespread sensibility until the advent of the Internet in things like reality TV recaps and Internet celebrity weirdos. (I realize that referring to our relationship with these things as a celebration is an optimistic reading of them, but damn it, I’m an optimist and that’s certainly how I experience them.)

For this reason Gremlins 2 is a pioneering work of commentary. Its self-awareness of genre conventions makes it something of a precursor to the meta-obsessed Scream. It is also aware of its iconoclastic lineage, as the secondary character Grandpa Fred is an increasingly ignored old-horror host whose turmoil references that of Boris Karloff’s character in Peter Bogdanovich’s genre-destroying/-renewing 1968 film Targets.

The hyper-awareness of seemingly everything, inside and out (it’s no coincidence that Hammer star Christopher Lee appears here as the hilariously named Dr. Catheter) is something we’d only come to appreciate more and more as the years passed. As yu(c)k-yu(c)k as Gremlins 2 is, though, it never reads as snide or overly showy. It doesn’t shame you for your interest in its world or introduce you to know-it-all characters who babble in your face. Its gleeful mirth is key to its joy.

On independent sexploitation director Russ Meyer’s 20th Century Fox debut, another ridiculous, mold-breaking sequel, Beyond the Valley of the Dolls, the film’s screenwriter, good old Ebert wrote that it “seems more and more like a movie that got made by accident when the lunatics took over the asylum.” Gremlins 2: The New Batch is what happened when the keepers of the asylum ate their original creation after midnight and emerged from their cocoons as the lunatics. It’s understandable why it was unappreciated upon its release, but it’s time that the world caught up.