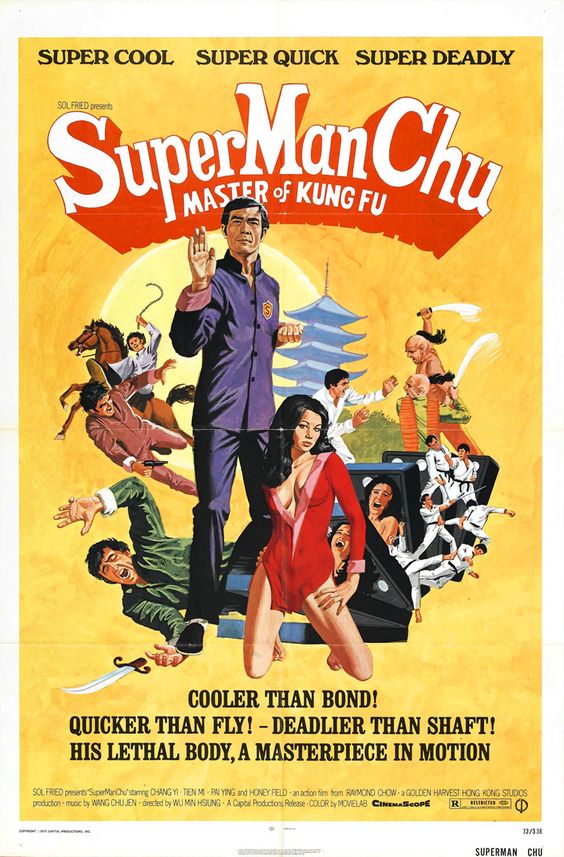 In the 1970s, Shaw Bros. kung fu films were notable for their lavish production values and action staged amidst standing period backdrops on studio backlots or large, elaborate sets built on studio soundstages. Rival studio Golden Harvest, lacking such facilities, gave their kung fu films a very different look, opting to shoot on location (usually in Taiwan) and finding old sections of cities and towns in which to shoot their period films. When they did use studio sets, they weren’t the biggest or most well-appointed. Everything had a gritty, lived-in look to it. As outlandish as the kung fu sometimes got, the settings were at least realistic.

THE STORMY SUN (1973) is a Golden Harvest production offering a standard revenge tale of a man with kung fu skills seeking to vanquish the criminal gang which slaughtered his parents and sister in a wanton act of pillage. It’s set in rural China and a region of flat plains and sparse development. The time is roughly the 1910s or ’20s, in the post-imperial era, but just before Japanese occupation. The only real commercial establishment we see is a brothel where the crime boss and his minions hang out. The film is shot on location and includes outdoor scenes in an old section of town marked by sprawling stone walls, narrow corridors and drab brick buildings. The exterior of the “brothel” looks like a colonial-era government building. The hero, Hung Ching (Chang Yi), is an expert with knives and goes after the crime boss, Li Ta Yeh, and his gang in a series of often reckless assaults. A loner named Chen Chun (Pai Ying) comes to town and gets a job with Boss Li after proving his worth by defending himself when attacked by the gang, but he soon makes it clear that he wants to be an ally of Hung Ching. Chen Chun’s weapons are a handful of coins that he throws with lethal force. Li Ta Yeh hires a pair of Japanese fighters to provide extra muscle, and soon forces Hung Ching’s hand when he abducts a girl, Tsui Feng, whom the hero had aided, and consigns her to the brothel.

The film is full of fight scenes, both indoors and out. It reaches a point where all Hung Ching has to do is enter a room and everyone leaps into position to fight him. He plunges into the fray, jumping on tables, kicking attackers away, leaping up to second floor landings, and even swinging on a chandelier at one point, all while throwing knives with unerring accuracy. Boss Li has an automatic pistol that he uses occasionally, but it’s neutralized when Chen Chun throws a coin that plants itself on the barrel, effectively blocking it. A bit far-fetched, to be sure, but a clever and original move nonetheless. The best fights involve multiple opponents for each of the heroes. The final showdown, however, pits the two heroes against two of the villains on a “beach” that’s basically just a vast field (with not a drop of water in sight). These one-on-one fights are not as interesting or imaginative as the earlier ones.

Chang Yi played a rather stolid hero in many Shaw Bros. films (SILENT SWORDSMAN) and a memorable villain in many later kung fu films (EAGLE’S CLAW). He has a few quiet dramatic scenes here, but once he starts fighting he stays strictly focused on the combat. He’s like Jimmy Wang Yu (ONE ARMED BOXER), but without the histrionics. Pai Ying was occasionally a hero, but usually a villain, which lends itself to the mystery about his character’s loyalties here. There are two leading female roles, although I can’t identify the actresses. They look like real women of the era and not like the Hong Kong starlets you’d find in the Shaw Bros. counterpart of this film. A turn of storyline late in the film involving the women was particularly unsatisfying and diminished my overall enjoyment of the film. The final sequence of fights is kind of anticlimactic as well. Still, I liked the look and feel of the film and was completely engrossed throughout.

I watched this on a Fortune Star Legendary Collection VCD (video compact disc) under the title, THE STORMY SUN. It was not a great print, but at least it was letter-boxed and in its original language–Mandarin with English subtitles. I’ve never seen the English-dubbed version known as “Super Man Chu: Master of Kung Fu,” which is referenced in the other comments here.