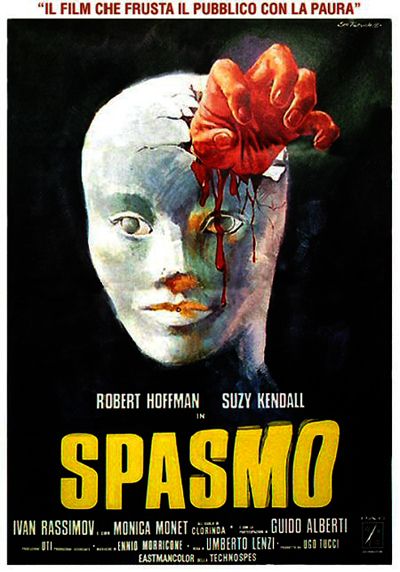 Umberto Lenzi is still playing the old school giallo hand here, which means less stabbing and more psychological games, but that doesn’t mean he hasn’t found new ways of presenting it. He spends the first hour of the film plunging you into a confusing plot, the explains what you’ve witnessed, then turns everything on its head again. Nice!

Christian (Robert Hoffman) is out at the beach with lady friend when he spots a corpse lying on the sand. The corpse turns out to be very much alive Barbara (Kendall) whom Christian becomes infatuated with. She runs off, leaving a thermos (!) with a strange name on it. This leads Christian to a boat where he meets Barbara again, and the two of them head off to a motel for some filthy squeazy, as long as Christian shaves off his beard. Of course, some strange man turns up in the bathroom and tries to kill him, resulting in one dead stranger. This happens in 75% of all one night stands.

Things go from bad to worse for Christian as he ends up in a never ending nightmare of people who may or may not who they say they are, dead strangers who come back to life, empty houses and their occupants, and the constant shots of mannequins dressed in sexy lingerie that have been stabbed with blades. Lenzi piles on the paranoia and the mysteries but doesn’t lose focus, bringing it all together nicely (even if the twists are a bit cliché by this point).

Still, despite saying “Oh! It’s that kind of plot twist!” Lenzi still has a couple of curveballs, one particularly grim and shocking. Lenzi keeps things nice and trippy for the most part too, as certain characters turn up as different people, and even what we’ve watched up to a point may not be the whole truth. The disturbing sight of sexualised dummies, which seems to have been switched with the real thing on purpose, just adds to the disorientation. The only downside is that some of the acting is a bit iffy. I’m looking at you, Kendall! Ivan Rassimov was fine though.

What people might have a bit of trouble with is home film that Rassimov watches in his office. It has all the zooms, focus shifts and edits of a professional film. When I think about it, I wonder if that was deliberate too…possibly.