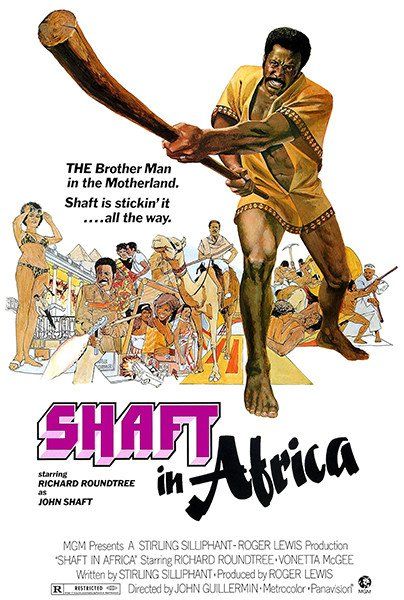 This violent Shaft (Richard Roundtree) entry begins when he’s obligated by threats to pull off a dangerous mission . He must go undercover to Ethiopia . In Addis Abeba , Shaft assumes the identity a native , as he’s accompanied by a beautiful African young (Voneta McGee) . His work is to break up a slave trade ring whose origin encounters in Paris and ruled by a tyrannical mobster (Frank Finlay) and his hoodlums (Aldo Sambrell) who are exploiting the immigrants in chain-gang employments and minimum wage . The private-eye eliminates anyone who stands in his aim , battling a variety of nasties and keeping things moving along until the final confrontation into the Château of Montfort .

This thrilling picture packs noisy action , violent fights , brutal killings , nudism and results to be quite amusing . The movie is plenty of suspense , thriller , intrigue , adventures and kinky sex , as usual . Strong , raw screenplay by Stirling Shilliphant (habitual of Irwin Allen’s catastrophe movies : Towering inferno , Poseidon , Swarm) and based on the characters created by Ernest Tdyman (French Connection) . Richard Roundtree is good as Shaft , his females are Voneta Mcgee with a wide career in blaxploitation genre and being a distinguished secondary ; besides , Neda Armeric , a Serbian actress ,she was recently elected for Serbian Parliament but she withdrew politics after scandal when her vote were registered in Parliament while she was on summer holidays . Colorful as well as evocative cinematography ; most of the scenes in Africa were shot in Ethiopia . The motion picture was professionally directed by John Guillermin , a known author of disaster movies (Towering inferno , Skyjacked , King Kong). The result is an entertaining entry for action enthusiasts and blaxploitation fans with lots of violence , adult issues and profanities . This third outing (the first titled ¨Shaft¨ and the second ¨Big score¨ by Gordon Parks) is followed by seven TV episodes (1973,1974) and 2000 version by John Singleton with Samuel L. Jackson .