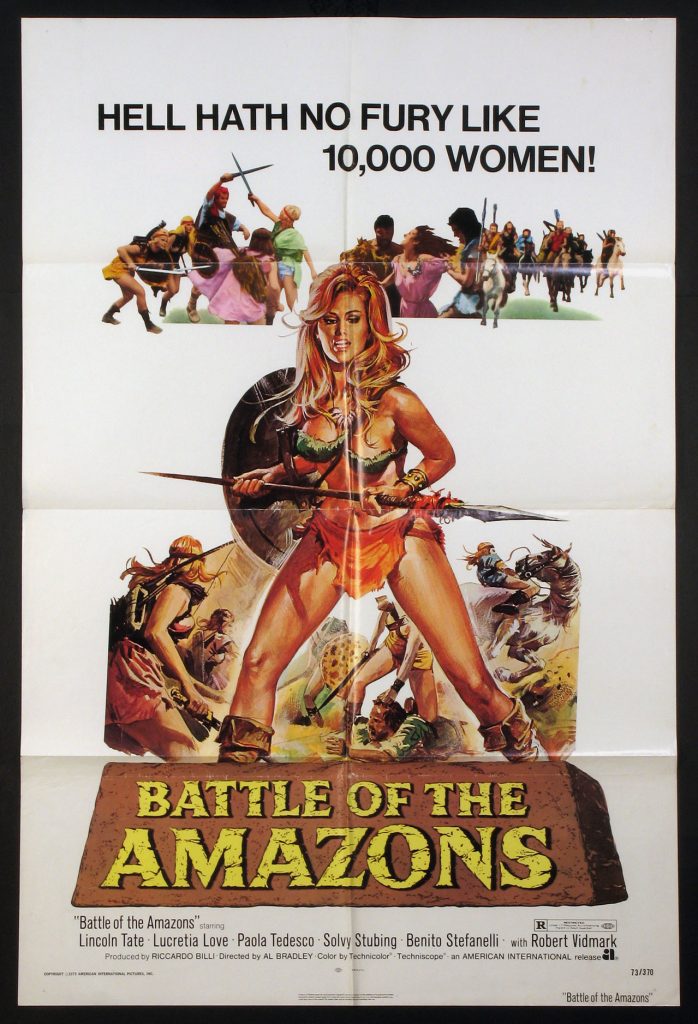 An extremely bad movie about warrior women which still manages to entertain from the sheer absurdity of it all. That, and a couple of the fight scenes are pretty good too, especially the huge, long-expected battle at the end which very nearly lives up to expectations. Sure, a lot of Italian cinema is stylish, magnificent stuff, but they also made their fair share of clunkers. Alfonso Brescia’s movie is hindered by exceptionally bad dubbing, acting, photography, choreography, lack of script, you name it…it’s a wonder that this film is watchable at all.

Things begin horribly with a really cheesy scene of a man and a woman riding towards each other on horseback in slow motion. What follows is a story involving capture, escape, torture, and eventually betrayal and warfare. This is bad stuff through and through, and bad movie fans will no doubt get a kick out of watching it. The best thing that I can say is that there’s a lot of action, so it never becomes too boring. Sadly the majority of the action scenes take place in the dark, so it’s impossible to see what’s going on. Copious use of day-for-night filming also makes this film look very poor. Forget about any luscious woodland locations – it looks like this film was shot in a copse somewhere, and picturesque is far from the word to describe this disappointing, dirty-looking locale.

The music is cheesy and horrible, the acting highly amateurish from most of the cast, with only one or two of the leads showing any professionalism whatsoever. Lincoln Tate is okay as the hero, and Lucretia Love (impossible to believe that this is her real name) as the heroine, but that’s about it. The dubbing is highly amusing and over the top as usual, packed with funny lines like “murdering bunch of bitches”. The Amazons’ battle cry sounds like “hahohi-i-i-i-i-i!!” and is really cheesy! Despite being a film about strong, powerful women this still manages to be extremely sexist, with one scene involving a lady almost being raped incredibly played for laughs! As I mentioned, the action scenes are all right and worth watching, especially the huge battle at the end which is where all the budget apparently went. There’s a definite martial arts influence with lots of flying kicks, headbutts and punches going on. The gore is minimal but there are a few cool scenes of people being repeatedly speared and stabbed. Most incredibly of all, though, are the many mistakes which are easy to spot while watching. For instance, actresses change parts in one scene, noticeably by their hair colour changing! Also, in the film’s major battle at the end, it’s pretty obvious that the Amazons are actually played by men. Three factors give it away; a) they wear masks to disguise their faces all of a sudden, b) they’re muscular, and c) they’ve got hairy arms and legs. It makes for very surreal entertainment, that’s for sure. Although a terrible film in most respects, BEAUTY OF THE BARBARIAN is a forgotten epic to be sought out by bad-film connoisseurs…if they can be bothered.