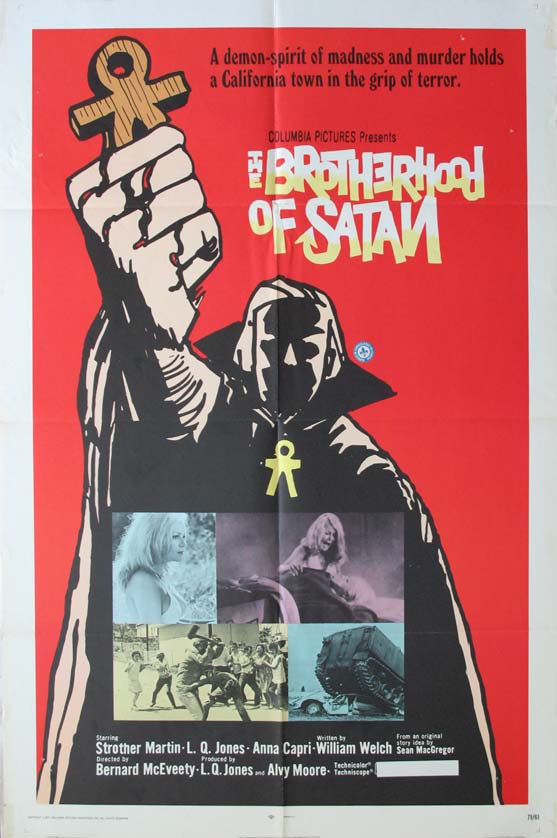 For some reason in the 1970’s it seemed to be a requirement for every former cast member of “The Wild Bunch” to appear in a low-budget satanic-themed horror movie. You had Ernest Borgnine in the ridiculous “Devil’s Rain”, Warren Oates in the underrated “Race with the Devil”, and of course William Holden in the the overblown sequel “Damien: Omen II”. The weirdest one though was probably this one which features both Strother Martin and L.Q. Jones (Jones, who would later write and direct the cult classic “A Boy and his Dog”, also contributed to the screen play).

It starts out promisingly enough with an entire family somehow being compacted in their car, all except for the young son who wanders off and runs into a strange group of other children. For awhile it is unclear whether this movie is ripping off “Village of the Damned” or “Rosemary’s Baby”, as you have this group of orphaned and kidnapped children wandering around after their parents have been done by a bizarre murder spree, AND you have a coven of decrepit oldsters led by Strother “What we have here is failure to commun’cate” Martin. The main protagonists are a good-looking but bland couple and their young daughter who are only passing through town, but become involved in the weird goings after they discover the remains of the compacted family. Jones plays the good guy sheriff, and Martin has a second role as the seemingly kindly town doctor.

The satanic scenes are very weird with a lot of freaky shots of children’s dolls, and people violently convulsing and dropping dead. The pretty blonde wife also has a “Rosemary’s Baby” style hallucinatory dream that is like “Coffin Joe” on particularly bad acid. The end finally ties everything together sort of, but this remains one of those 70’s movies that is a lot longer on style than on logic. Still I guess I’d recommend it if you go for these sort of films at all.