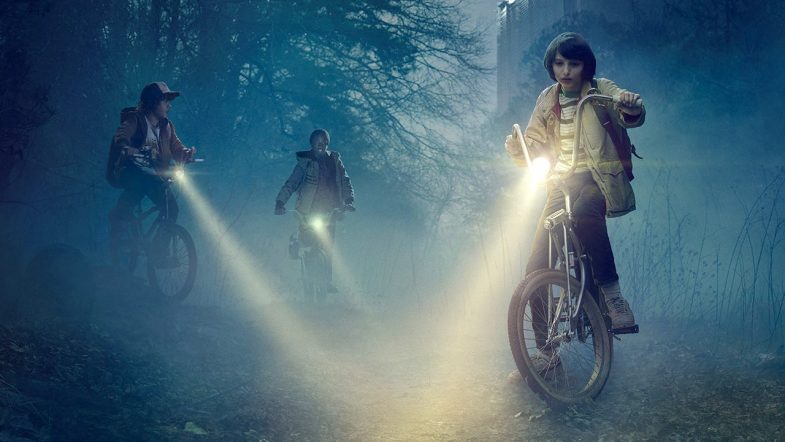 I am lucky to have been born at a time that has allowed me to appreciate all sorts of movies. I have managed to see the birth of the movies with the screening of Edwin S. Porter’s “The Great Train Robbery” made in 1905 and have screened masterpieces like “The Godfather” and “Citizen Kane”. I can safely say that movies have been a major gift in my life. They have allowed to witness history, see our society from a different perspective and at times have provided a distraction from a hectic and frenetic world. I feel strongly that movies are the most encompassing form of art, a social glue, and a vital part of our economy.

On July 4th Netflix launched the third season of its hit series “Stranger Things”. Well crafted and more than popular, Stranger Things is the crown jewel of the streamers treasures. It has taken hold of the viewer’s imagination and memory and created a must-see binge-able event that has been a strong summer foundation.

“Stranger Things” is built on the immense love for the late ’70s and ’80s pop culture that our society as a whole has, including the works of Steven Spielberg, Stephen King, Larry Cohen, and John Carpenter. It drips John Hughes and shines a light on George Romero. In one of the first scenes of the season 3 of Stranger Things, lead characters head to the newly opened Starcourt Mall for the opening night of Day of the Dead. Day of the Dead is the third installment in director George A. Romero’s iconic Night of the Living Dead series and was described by Romero as a “tragedy about how a lack of human communication causes chaos and collapse even in this small little pie slice of society.” It is directed in an austere and bare-bones fashion that would not see the big screen if released today.

It is that drilling into our cultural core that has gifted the series with the popularity it frankly deserves. At the same time as celebrating our cultural love of all things, 80’s it betray a longing and a hunger to go back to a form of entertainment that is built on more classical story structures and dealing with more identifiable characters. Woven into Stranger Things is an empathetic view of the middle class, a respectful nod to the majority of the audience that is enjoying the show. They can empathize and identify what is going on the screen. They see elements of their own life and can enter the story in a different manner than movies offer up today. Stranger Things is like getting a postcard or letting from a relative or a friend you dearly miss. You begin to watch the series, in my case binge watch and it is gone far too soon.

I have to admit I really do not relate to Tony Stark aka Ironman. A billionaire zipping around in an iron suit and living a lavish silly lifestyle does not cut it with me. I want to see people, people like me. I have much more affinity with Ferris Bueller than I do any character from either the Marvel or DC universe. I want my universe, ordinary people facing extraordinary challenges of one sort or another and coming out of the experience the wiser for it. I was to empathize with a storyline and not have it force fed to me by some accountants and their marketing minions out of Hollywood. The lack of empathetic storytelling and the over-reliance on increasingly goopy CGI has deeply handicapped the movies of the 21st century.

The art of empathetic and touchable storytelling is what has made the movies. It is the art-form’s deep humanity that is its greatest strength. It is understanding that Ricky Blaine is giving up the greatest love of his life in a selfless act in the movie Casablanca, it is feeling deeply the words of Henry Fonda as Tom Joad in The Grapes of Wrath, it is the angst and desperation of Ernest Borgnine playing a lonely butcher in Marty that is shared with the audience and it the sharing of the deep joy and relief as Luke blows up the Death Star. It is these moments and thousands like them that create the movies. Ladies and Gentlemen these are movies, movies that speak to our fellow man, movies that evoke the human experience. Movies that must be remembered. These are movies that are not formed in Hollywood, but movies that are shaped by common aspirations and need for and hardened by common humanity. They are enduring.

The Duffer Brother’s the creators behind Stranger Things. are fully aware of the vacuum that exists with our collective cinematic soul. They know how important the imagery that was created by the movies of the ’80s. They are aware of the need for this in their audiences. It is the same need that drives 9,000 people to go see ‘The Princess Bride” at Red Rock, or the good people who make the pilgrimage to the Artcraft Theatre in Franklin Indiana every week, it is the need to have the movies shared with them. This is something that Hollywood has long forgotten, and is leading to its downfall. But it is important to note that movies are not Hollywood…..movies are us.

As a sidebar, I worked in a very small way on a documentary on Larry Cohen, the independent filmmaker behind Q The Flying Serpent, It’s Alive and Black Caesar. Larry loved the movies and was happiest when he worked outside of Hollywood. Larry passed away this year and will be deeply missed. The theater marquee at the Starcourt Mall in Stranger Things boldly proclaims Larry’s movie The Stuff, it is a tribute and a deep nod to a kind of movie-making that must be made and distributed. As Stranger Things shows, the audience, the people are hungry for these kinds of stories again.