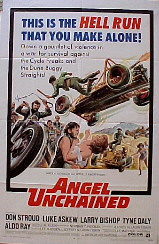 The title of this biker flick seems to suggest that the character of Angel (Stroud) will at some point cut loose and split open some heads, but that never really happens. It refers more to the fact that he breaks free of the commitment he once had to a bike gang (or club, as it is referred to here.) The film opens with a bizarre scuffle that takes place in an otherwise deserted amusement park as rival bikers pound each other senseless ON the rides (including, hilariously, a small roller-coaster!) Stroud, having had his fill of the leather and chain lifestyle, then departs to find himself. Eventually, he comes to the aid of two hippies and winds up living on their dilapidated commune. Unfortunately for all of them, the local townsfolk don’t take to hippies and repeatedly try to intimidate them and force them off the land. So Stroud calls upon his old biker buddies to come to the aid of the flower children. In this case, the solution may be more of a danger than the original problem since the bikers are depicted as the most repellent, foul, destructive pigs imaginable. Between the rather clueless hippies, the redneck townspeople and the nasty bikers, there are few people in the film to root for. Stroud is a reasonably appealing presence and Daly (as his newfound love) manages to inject a bit of pleasantness and heart into the film. Askew, as the hippie’s leader, does an okay job. Bishop somehow manages to remain attractive despite the company he keeps and the careless character he portrays here. Among the remaining cast is McKinney as a savage, mildly deranged biker punk who thinks of women as property to be used and defaced upon his whim. McKinney is best known for his heart-stopping role as a violent, inbred, mountain man in “Deliverance”. Ray has a cameo as the town’s lackadaisical sheriff, who can scarcely bother to lift a finger in the midst of conflict. The cast of the film is diverse enough to warrant a look, but most fans of the genre will be disappointed in the finished product. There are a few extended fight scenes, but nothing too spectacular and the movie cops out by having people escape their vehicles just before they crash, giving the film a less exploitive and less severe flavor. It’s almost cartoonish at times, though there is one chicken that gets treated pretty badly. The only nude scene is a demure one with Daly mostly obscured behind the wood slats of an old pick up truck. A few decent moments of acting creep in, but it tends to be a pretty lackluster affair. Fans of the stars will likely enjoy it more than the casual viewer.