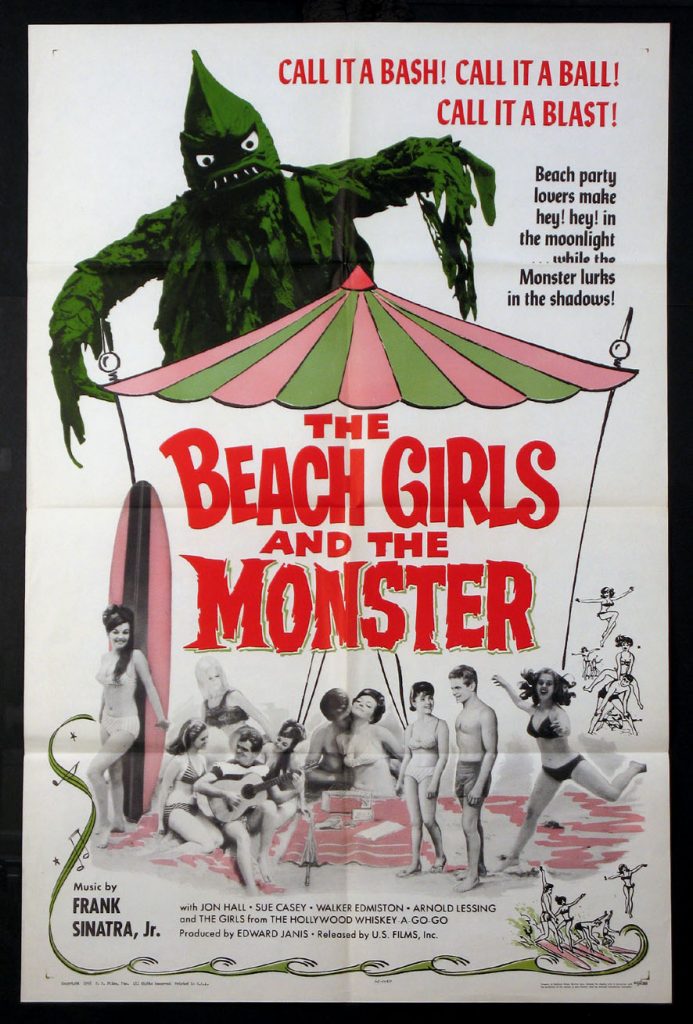 What “The Night of the Hunter” was for Charles Laughton–the sole directorial effort from a great film star–“The Beach Girls and the Monster” was for ’40s matinée idol Jon Hall. But whereas Laughton’s film is one of the eternal glories of the cinema, Hall’s picture is…well, let’s just say not nearly as glorious. In his film, Hall stars (at this point in his career, looking like Ernest Borgnine’s older brother) as Dr. Otto Lindsay, an oceanographer whose troublesome son, rather than follow in his Pops’ footsteps, prefers to go surfing with his pals and play his guitar at beach parties. This domestic friction is made even more problematic when a seaweed-draped, lumbering, rather ridiculous-looking monster starts to attack kids on the beach…. Anyway, Hall’s film is silly in parts but not nearly as goofy as you might be expecting; certainly more serious than a Frankie & Annette movie! It has been well shot in B&W (although utilizes egregious rear projection for all driving sequences), showcases an annoyingly catchy theme song by Frank Sinatra, Jr., is decently acted, and features a twist ending of sorts that goes far in mitigating much of the silliness that has come before. Almost stealing the show is Sue Casey, playing Hall’s trampy wife; my buddy Rob is quite right in pointing out that her sharp-tongued, shrewish vixen of a character would have been right at home in a ’60s Russ Meyer flick. “Beach Girls,” with a running time of only 66 minutes, still feels padded, with surfing stock footage, rock ‘n’ roll numbers accompanied by boogying bikini babes (played by the Watusi Dancing Girls from the Whiskey-A-Go-Go!), and assorted hijinks. Still, I can think of much less entertaining ways to spend an hour. As Michael Weldon succinctly puts it, in his spoiler review in “The Psychotronic Encyclopedia of Film”: “A cheap laugh riot with lots of bongos, murders, and girls in bikinis.”