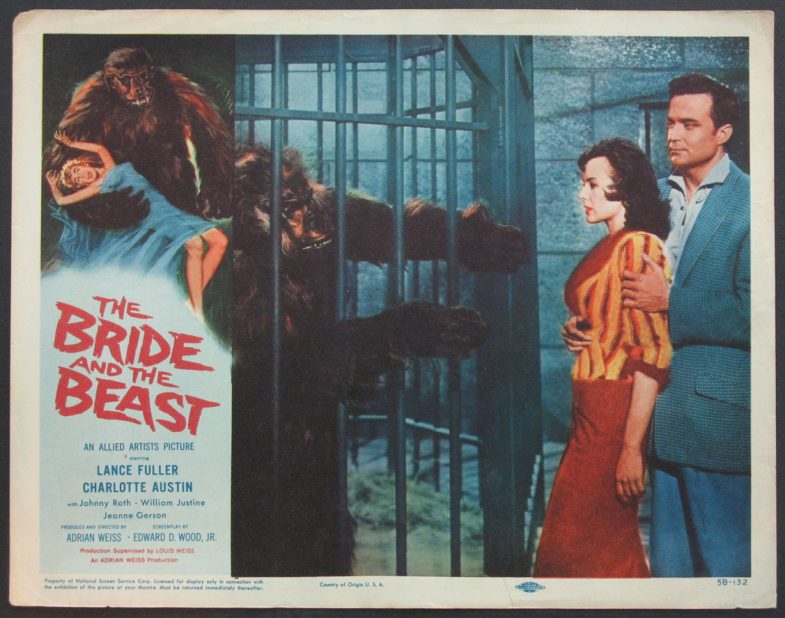 Laura Carson (Charlotte Austin) has just married big game hunter Dan Fuller (Lance Fuller.) On her wedding night she finds herself strangely attracted to Spanky, a gorilla gone bad that Dan keeps locked up in a basement cage. Before you can say “Ed Wood wrote this,” there are gun shots, nightmares, hypnotism, and Dan’s unhappy discover that bride Laura may be the reincarnation of a gorilla queen! Can you dig it? Now and then a bad movie becomes unintentionally hilarious, but most of the time bad movies are simply bad. BRIDE AND THE BEAST actually teeters between the two, and this is largely due to the two leads: even in the face of producer-director Adrian Weiss’ obvious lack of talent, Austin and Fuller prove unexpectedly competent, and they actually manage to hold the worst of the dialogue at bay. What this means, however, is that BRIDE never self-destructs in the ludicrous way of such films as PLAN 9 FROM OUTER SPACE–and in consequence it isn’t so much unintentionally hilarious as it is unintentionally amusing in a mild sort of way.

The film is full of absurdities. Dan Fuller’s basement, where the ill-fated gorilla Spanky is caged, has a refrigerator, but illumination is provided by torch. Servant Taro (Johnny Roth, in what seems to be his only film role) is very obviously a white man in bad “native” make-up; he runs around saying “Bwana” a lot. There is a lot of canned wild animal footage, shots of Africa that look suspiciously like shots of South America, and men in bad gorilla costumes. And Ed Wood being Ed Wood, he just can’t resist writing references to angora sweaters into the script