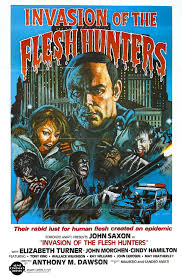 Maybe the fact that this particular cannibal movie wasn’t directed by one of the usual suspects (Lenzi, Deodato) is what makes it so tolerable. Saxon plays a soldier who goes back to some south Asian country to rescue his POW buddies. He doesn’t seem too bothered by the fact that when he finds him, they’re eating human flesh, or that one of them bites him, and infects him with some kind of cannibal virus. Fast forward a number of years, and Saxon is gettin a hankerin for some human meat. This all happens about the time that his buddies decide to break out the mental hospital they’re in. It all ends up with Saxon and his buddies infecting a bunch of people, and running from the law in the sewers. Cannibal city, baby.

Radice getting his abdomen blown clean out with a shotgun is reason alone to watch this movie (if you can figure out how they did this effect, let me know). The rest is pretty standard, as far as movies go, but it is a lot better than most cannibal movies. At least it takes place in the city and not in some jungle. Worth a look, if you’re a cannibal or John Saxon fan.