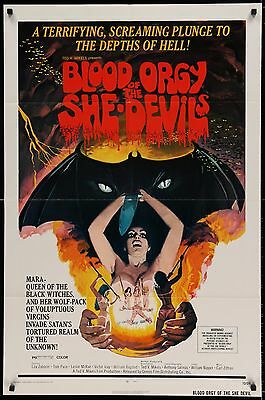 I have to admit, this movie was not as bad as I thought it would’ve been. Now, it’s no Dario Argento, but there is this underlying dark theme of witchcraft, occult, the black arts and the low budget quality is apparent. Plus, considering I’ve seen “Girl in Gold Boots” first, I thought this one scored higher (although Gold Boots has become a favorite laffer for me). The music and visual effects helped add a creepiness to the film. Mara as the head witch does scream a lot especially during the seance scene. The Indian guy reminded me of Tomy Chong. Tom Pace did not make as many goofy faces as usual and Leslie McRae (ROWR, yum yum!!) was just great to look at despite her so so acting (I think Ted agrees). Some flaws included the witch trial flashbacks with the men donning modern dress slacks (poor kid got whipped) and the fake bat. Good late night fodder.