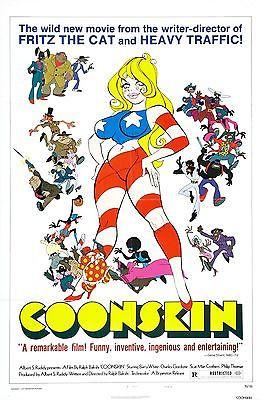 Coonskin is a very rare treat for blaxploitation film goers alike. First of all, if you can’t get past the title of the film, you probably won’t make it past the five minute mark on the movie. This is an anti-white comedy that combines animation with live action. This may appear, to the superficial mind, as a raunchy, balls out, no holds barred comedy. And it just may be. However, there’s a lot more to the movie, then the movie itself. It’s not just about rebellion. It’s not just about a revolution. It’s not even about hatred towards whites ( although the word cracker is used a lot. If you have a problem with that, I got a message from 1975 for you: THEY DON’T CARE!) The multi layers of comic effort here, along with musical ability, the style, and the intelligently written script here, cannot be underestimated. If you’re only seeing this as a dumb black comedy, you’re missing the smart side. You’re probably also missing the underlying messages, too. One message is simple, it just demands some respect. Just because you don’t like, or don’t understand it, doesn’t mean it’s not good, got it? So expect this, and you’ll be fine: Expect some racial tension against whites, expect some crazy animated characters, expect some crazy animated characters with a little nudity, and expect some fun and maybe a few laughs. If you’re not in the mood for that, then Coonskin is not the film you’ve been looking for.