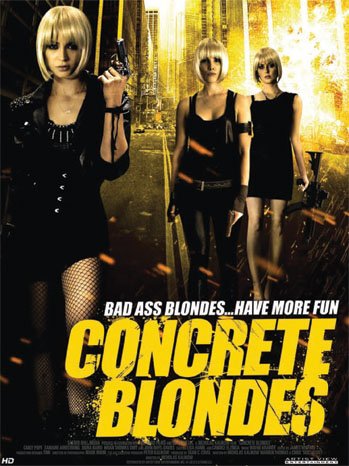 Screwball comedies have been around for decades. There are many good ones, and, it stands to reason, that there are as many (if not more) bad ones. I’m not particular fond of them; I don’t dislike them, but I do think they’re certainly hard to pull off with a winning script. And when you don’t have a winning script? Well, then you spin it like you do, and that’s largely what you get with something that’s as banal and predictable as CONCRETE BLONDES – it isn’t a total failure, but it probably won’t win many converts to the careers of the involved talent.

That’s a shame, too, because it could have. Perhaps if it hadn’t been in the hands of such an inexperienced writer AND director – one who may’ve seen the other’s weaknesses in time to salvage this. I think everyone – audience included – deserved better.

(NOTE: The following review will contain minor spoilers necessary solely for the discussion of plot and/or characters. If you’re the kind of reader who prefers a review entirely spoiler-free, then I’d encourage you to skip down to the last three paragraphs for my final assessment. If, however, you’re accepting of a few modest hints at ‘things to come,’ then read on )

Daytime accountant Kris Connifer (played by Carly Pope) can’t quite catch a break. At work, she’s struggling with clients who can’t pay for her services in cash, while at home she’s torn between the antics of her live-in-gal-pal Tara (the always lovely Samaire Armstrong) and their sexy roommate Sammi (Diora Baird). But when Tara and Sammi stumble across a drug deal gone bad, they find themselves in possession of a suitcase with over three million dollars. Could it actually be the answers to all of their money woes, or will it drive the girls to do unspeakable things all in the pursuit of untold riches?

What hampers CONCRETE BLONDES the most is that fact that it never establishes a quality tone from the get-go. The opening scenes play like a bit of farce, and not much later – once the three ladies are thrown together – it vacillates between drama and downright screwball lunacy. Then – in the final act – it goes full bore farce once more before eventually succumbing to an almost dystopia-lite urban crime thriller. Simply put, BLONDES wanted to be more than it was ever capable of being, and that’s logically the fault of writer/director Nicholas Kalikow. Instead of trying to embrace all elements of perhaps the films he most likes and/or respects, he should’ve dialed back all of the influences, kept it simple, and then gone for broke.

Of course, putting all of the blame on Kalikow’s shoulders would dismiss the relatively inadequate performances he manages to eek out of these players. In particular, Armstrong is the only one I think far more capable of giving more than she did here (I’ve seen her in a handful of projects, so I trust she did the best she felt possible with the material); and veteran character actor John Rhys-Davies served as little more than a functional ‘heavy’ for the purposes of the mildly convoluted plot. As for Pope and Baird? Meh. Thankfully, all of the ladies are easy on the eyes, so much so that a tighter edit or a more tightly delivered tale would’ve given this a greater chance to find an audience.

Unless I miss my guess here, BLONDES is exactly the kind of film most regular folks want to like, especially when it comes to crime capers. You’ve got good-looking ladies – each with a different version of the classic heart of gold – who’ve all been wrong by that big, mean world outside. You want them to get their acts together. You want them to succeed, even if that means taking it on the lam and heading south of the border where no one will ever find them and their suitcase of stolen cash. Had it all started and stopped there, then I suspect this one would’ve had a greater chance to win hearts and minds. Unfortunately, that isn’t the case, and we’re all left – like the girls – wishing for something most will never have.

CONCRETE BLONDES (2012) is produced by CB Films North and Sacred Bull Media. DVD distribution is being handled through Inception Media Group. As for the technical specifications, this indie-style feature boasts the same quality sight and sound you’d find associated to practically any other indie-style feature. As is often the case when these smaller films find eventual release, there are no special features to speak of, save for the theatrical trailer: I’m not sure much is lost by having nothing extra, as there was little here of any great substance.

MODESTLY RECOMMENDED as more than a ‘curiosity’ than anything else. CONCRETE BLONDES isn’t a bad attempt at trying to do something a bit avant-garde with storytelling: it has an interesting criss-crossing and out-of-chronological-order narrative, and it tries to mix a contemporary twist on screwball comedies with the gritty crime caper kinda/sorta like Quentin Tarantino likes. Sadly, it doesn’t do either all that successfully – performances aren’t quite manic enough when they need to be, nor are they ‘screwball’ enough when it’s required of the players – and it’s all edited together with an almost ‘who cares?’ motif. Sadly, it could’ve been a tight little gem if someone had paid closer attention to what makes these uniquely twisted films work instead of going for the workmanship grade. Better luck with a remake.