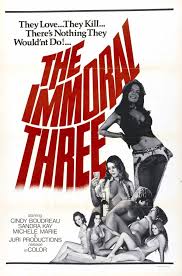 Three sexy women, raised separately as orphans, are summoned to a funeral, where they learn that they are in fact sisters and that the dead woman was their mother. The latter had been a secret agent  the notorious Double Agent 73 (a reference to Wishman’s earlier “Chesty Morgan” flicks)  who had been murdered in the line of duty. (The actress shown playing her in flashback bears very little resemblance to that formidably proportioned actress-stripper, especially at the bust level — but of course, who could?). She had used her feminine wiles (if you know what I mean) to seduce and betray enemy agents, but was rather careless in executing this modus operandi  the unwanted daughters being one of the job hazards. The executor of the will tells the girls that they can inherit a cool million each as long as they can track down their mother’s killer within one calendar year. Plenty of absurd violence and nudity ensues.

Fans of her earlier work may be surprised at the relatively large budget Wishman must have had at her disposal for this one. It’s in living colour, we actually see people’s mouths move while they talk (though out-of-sync in most cases), and one of the sequences may actually have been filmed in Las Vegas (mixed with plenty of stock footage, of course). The women are better looking than usual  two have voluptuous 50s- style exotic dancer proportions, but lithe “Sandy” wouldn’t be out of place in a Playboy movie today (except for her obviously natural bust). Of course, the men are generally horrid  probably investors getting in on the “action”.

But don’t be deterred  the film shows all the earmarks (and other body parts) that we’ve come to cherish — canned lounge music cues, crass set decoration (now in hideous day-glo colour!), closeups of feet, aimless scenes of cars driving and pedestrians walking, and most of all, a complete lack of logic in how the characters act. The women’s threads are dropped at random, and they alternate between abruptly seducing some lucky(?) male passer-by and being sexually assaulted by others. The prop master uses a couple of covered card tables laid end-to-end for the coffin and a cardboard box for the back of a picture frame; another photo has a bra hastily drawn over the breasts of the protagonist with a black magic marker. When the girls are skinny dipping, one of them does a handstand in the water (all the better to reveal her assets), and judging by the wobbly pose and quick cutaway, the lifeguard probably had to drag her off the bottom of the pool a split second after the shot.