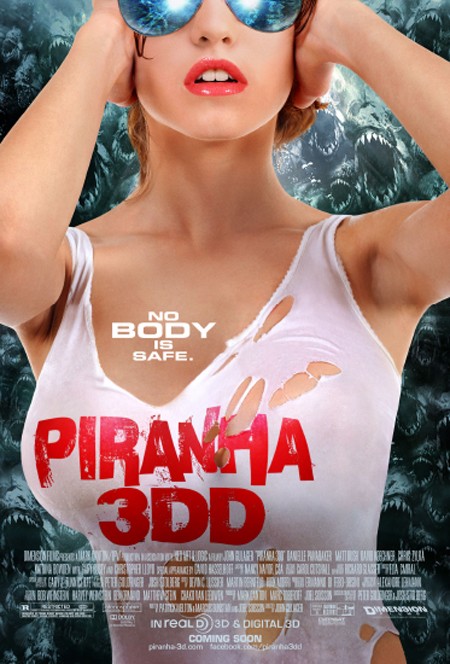 “Piranha 3D” was a film that, for all intents and purposes, probably should not have succeeded, yet it ably demonstrated that if a director fully commits themselves to an idea, no matter how unappealing, the results can impress. Indeed, Alexandre Aja’s remake of Joe Dante’s 1978 B-movie classic gleefully revelled in its boobs-and-blood modus, while delivering action both tense and smart, and, well, featuring Kelly Brook wearing absolutely nothing for most of her screen time. It follows that this sequel – directed by the relatively unknown John Gulager – lacks the bawdy confidence of its predecessor, but still manages to deliver the gory goods and cavorting, naked bodies that its target audience desires.

Piranha 3DD follows the schematic of the previous film to a T, a lazy move perhaps, albeit one which still works, if with lessening effect. Again, one of the opening scenes has a former, now obscure film star – this time Gary Busey in place of Richard Dreyfuss – bite the bullet at the teeth of a swarm of piranhas, before we’re introduced to the attractive teen lead, Maddy (Danielle Panabaker) and all Hell starts to break loose.

It might be thought impossible, but this sequel is in fact even keener to layer on the smut and sleaze than the previous film; within minutes, the screen is festooned with bouncing 3D breasts, as Maddy’s lecherous step-father Chet (David Koechner) has turned their family water park business into a glorified slip-and-slide peep show, complete with “water-certified strippers”. Though none of the nudity is rendered with the oddly thoughtful artistry of the first film – after all, who can forget Kelly Brook’s beautiful naked dip through the water with a feisty friend? – it is still delivered with amusement as well as titillation in mind.

While the last film dared to build slowly, not delivering much in the way of gore in its first half, before unleashing a full-tilt Grand Guignol in its second, Piranha 3DD instead unfolds as a more conventional slasher-type film, with piranhas attacking poor, dumb teenagers with increasing aggression throughout. This of course builds to a grand set-piece at the water park, though disappointingly, the stinger at the end of the last film – which saw Adam Scott be devoured by a gigantic “mother” piranha – appears to have been forgotten entirely.

Like its predecessor, the wealth of truly entertaining content comes in the second half, where a litany of cameos provides plenty of amusement. Christopher Lloyd returns as the loony Dr Goodman, chewing through the dialogue with a welcome, knowing enthusiasm, and whoever convinced him to utter the phrase “laughing diarrhoea baby” not only once, but twice, should probably get some sort of bonus. David Hasselhoff is also an inspired choice as the water park’s celebrity “lifeguard” despite, as he asserts, having never been a lifeguard in real life. Scribes Patrick Melton and Marcus Dunston – who also wrote most of the lesser “Saw” films – milk his appearance for all it is worth, wringing out one particularly hilarious Baywatch gag which admits The Hoff’s advanced age while still giving him his due as an entertainer.

Also returning is Ving Rhames as Deputy Fallon, now kitted out with titanium legs which the piranhas cannot bite through, and to boot, the legs also have shotguns attached to them. Though more could probably have been done with him overall, Rhames gets a good share of the film’s laughs, and steals a few scenes with some outrageous one-liners.

Those expecting a gorefest on the level of the previous film might be disappointed by the final showdown at the water park; it is interested in smaller moments between its characters rather than conveying the bloody scale of the carnage like the 2010 film. That said, it somewhat compensates for this with a greater focus on absurd comedy, namely some rib-tickling references to the likes of “Jaws” and “A Nightmare on Elm Street”. Like before, there is a stinger left for the very end, an absurd twist which makes the last film’s cliffhanger seem positively grounded. Needless to say, if a third film is made, it is going to be very interesting. And make sure you stick around for another appearance from Hasselhoff during the credits.

Though not as inventively gory as the previous “Piranha”, the riotously funny cameos make it worth another go.