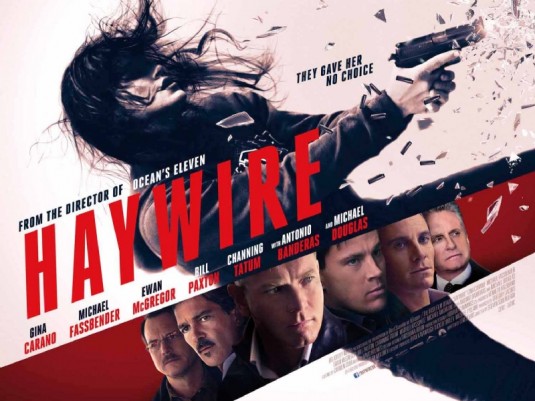 Building a movie around a mixed martial arts fighter seems like a good way to earn a spot on the straight-to-video express. Unless, of course, you’re Steven Soderbergh. Then — because you’re smart and imaginative and can seemingly make any sort of movie (and make it look effortless) — you build your movie around a fighter with virtually no acting experience.

And you get “Haywire,” a sharp little action flick that manages to be smart, funny, suspenseful, attractive and — when it needs to be — bone-bruisingly brutal.

MMA fighter Gina Carano plays our hero, Mallory Kane, a private contractor who specializes in espionage, foreign extractions and other off-the-books government work. As the movie begins, things have already gone horribly wrong, and big, tough Channing Tatum is trying to drag her out of a diner. It looks disturbingly like a case of domestic abuse — until, that is, Mallory turns the tables, beats Channing up and flees with a terrified diner patron.

After that, things settle down (just a bit) and we move into Soderbergh’s patented time-shift mode, with the story effortlessly skipping back and forth between Mallory’s violent past and her equally violent present. We see her on the job in Barcelona and Dublin, we see her encounter betrayal and avoid capture and, best of all, we see her do some serious damage to her male co-stars.

Carano might be a newcomer to the big screen, but the rest of the “Haywire” cast isn’t. Soderbergh assembled a real murderers’ row to support his star, including Michael Douglas, Ewan McGregor, Bill Paxton, Antonio Banderas, Michael Fassbender and the aforementioned Mr. Tatum. And thankfully, you get to see Carano take many of them to the cleaners. The fight between Carano and Fassbender, which takes place in a luxury hotel suite with both of them in formal dress, is the highlight of the film.

Ultimately “Haywire” succeeds thanks to Carano. She’s attractive in a down-to-earth way, but she avoids the skin-and-bones look of too many actresses. And, thanks to her solid frame, she’s completely believable wiping up the floor with the rest of the cast. Thankfully, Soderbergh frames the fights in wide shots and avoids the Cuisinart editing style most movies succumb to. That means you can (a) actually see what’s happening and (b) appreciate the skill on display.