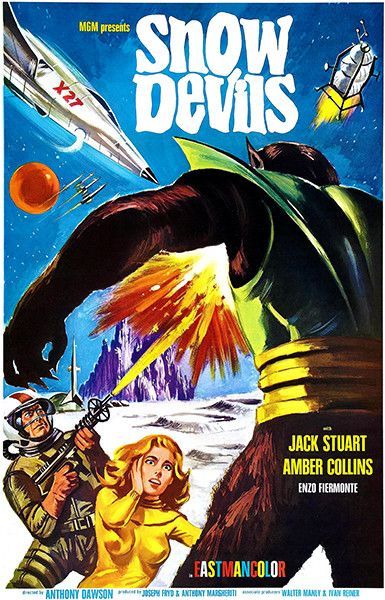 Antonio Margheriti’s THE SNOW DEVILS was probably the first of his GAMMA ONE QUADROLIGY films to be made though the last released in English and remains the most unique of the four movies … though it may not necessarily be the most impressive of the efforts. My favorite is PLANET ON THE PROWL (or WAR BETWEEN THE PLANETS), with its emphasis on military jargon and space action. SNOW DEVILS is for the most part an Earth-bound adventure but is another example of Margheriti’s fascination with hostilities existing not so much between the races inhabiting the cosmos, but battles between the actual stellar bodies themselves.

Some of the GAMMA ONE films are amongst the best pre-“2001: A Space Odyssey” science fiction from the 1960s but all are essentially potboilers with ready-made elements that are reused from film to film in the same way that Spaghetti Westerns were made. In spite of the release dates assigned by the IMDb (no offense!) the films were all made *simultaneously* in 1964 using the same sets, stock casts, musical cues, technical crew and basic story premise ideas. This has resulted in some confusion not only of the dates of execution/release, but in precisely which order they should be viewed when considered as a “series”. After all, any story arc needs a beginning and an ending, you can’t have four narrative arcs in a single story line existing simultaneously simply because it’s impractical to watch four movies at the same time. You’d need four TV sets either stacked up 2 on top of each other or arranged around you in a square, with the viewer seated in a revolving chair. The question would then be which screen do you look at for any given moment? which aptly illustrates the absurdity of the idea.

So where in the series do you start? My answer is with THE SNOW DEVILS, since it is the most unique of the four examples that exist in English (the other three being PLANET ON THE PROWL, WILD WILD PLANET and THE DEADLY DIAFONOIDS, amongst other alternate titles for each of them). My thesis on why begins with the look of the film: It does not have the polished sheen of the other three films and is literally the most “down to earth” and thusly lowest budgeted of the three. It’s musical score by Angelo Francesco Lavagnino (who provided the scores for all four films) is the most unique & memorable: The scores for the other three films are more interchangeable and in fact recycled from movie to movie, though the energetic theme for SNOW DEVILS is only heard in SNOW DEVILS. We never hear that memorable refrain again in any of the three other movies, though some of the more incidental musical fills do pop up again (as well as the proto-Loungey pop song used during a lighter moment at a summer resort during the beginning of the film).

The space technology props are also more spare & “klunky” looking, picking up what may have been left over from 1962’s BATTLE OF THE WORLDS and suggesting that Margheriti’s skills in production design evolved as the series progressed (with PLANET ON THE PROWL being the most “realistic” looking, the goofy spacewalk scenes notwithstanding). SNOW DEVILS also has somewhat different costuming than the later efforts, suggesting to me at least that Margheriti’s wardrobe department copped whatever pre-existing costumes they could get their hands on that looked futuristic, resulting in a kind of mismatched hodgepodge where the other three films are more unified in how the characters dressed. Star Giacomo Rossi Stuart’s hair also changes between SNOW DEVILS and PLANET ON THE PROWL (he does not appear in the other 2 films). Here he is more of a coiffed blond though by PROWL it got darker & redder and had a more military look to the styling. Here he looks like he just wandered onto the set from romantic comedy where his hair was dyed blond. His Commander Rod Jackson is also somewhat less gruff & formal than in PROWL, where his barking of orders & dressing down of pretty female subordinate officers is one of the film’s guilty pleasures. Jack Stuart would have made a fantastic air force officer.

One other aspect of the film that suggests to me that it was the first one executed is that of all the four GAMMA ONE movies, this is the one to which time has been the least kind. The Snow Devil monsters themselves come off as somewhat less than intimidating, the set design has more in common with classic Flash Gordon than Stanley Kubrick, and the emphasis on Earth bound set & location work makes the film feel more like a throwback to the 1950s than a vision of things to come. But since there is no specific documentation of just which order Margheriti himself had in mind when making them any such conjecture is mere speculation. I’ve asked his son, producer/director Edoardo Margheriti, for advice on this and his own reply was somewhat ambiguous, confirming that all four were made at the same time but that there is no specific order in which they are to be viewed since they all had different release dates in different regions or as different language versions. Just because this one was released later than the others does not mean it was finished last, nor does this mean that the others were completed after it. And since they were essentially disposable B-grade movies usually shown on a double bill with something else like it the release schedule was arbitrary based on the needs of the distributors.

Confused? GOOD. I have been puzzling over this conundrum of which order in which to view the GAMMA ONE films for about four years now and am delighted to pass the brain-twister on. Figure this one out with a formula proof to back it up and I will buy you an orange.