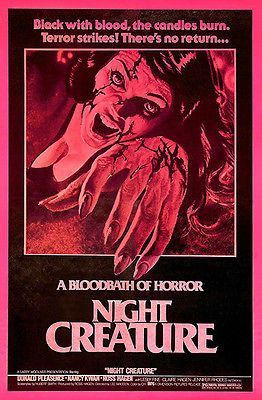 A voiceover accompanies and describes celebrated writer and hunter Alex MacGregor (Donald Pleasence) while he and his attendants plod through a Thai jungle during this film’s opening scene, as they search for a deadly rogue black leopard that has killed numerous local villagers. Alex is attacked and savaged by the animal, and made permanently lame as a consequence, and his offer of a ten thousand dollar reward for the beast if captured unharmed is soon claimed by successful Siamese beaters, following which the hunter keeps the caged mankiller at his remote palatial home while preparing for a rematch. The purpose of this revived hunt will be for MacGregor to expunge a newly found emotion within him: fear (although his high-powered scoped rifle should be of no little assistance in that regard), and after giving his servants two weeks off with pay, loads his weapon with nine rounds (for the fabled number of lives), frees the creature and limps off alone in pursuit of it. This is an interesting notion for what promises to be a stirring tale of adventure, but then the plot shifts to Bangkok, where are found the two daughters of Alex, Leslie (Nancy Kwan) and Georgia (Jennifer Rhodes with the work’s best performance), along with the latter’s child, all about to embark upon a journey to pay their father a surprise call. The three females are escorted by a transplanted Texan, a tour guide in the Thai capital and a former lover of Georgia, and he becomes romantically embroiled with her sister immediately after the group’s arrival at the vacated MacGregor estate, while the title character is only seen as he threatens the visitors, the big game hunter seemingly having been swallowed by the encroaching flora as he seeks his hardly elusive prey. The matter of Axel’s struggle with fear becomes subordinate to his offspring’s emotional entanglements, although there are many slow motion closeups of the brute to enliven the action in a film that is bedevilled with serious flaws of continuity.