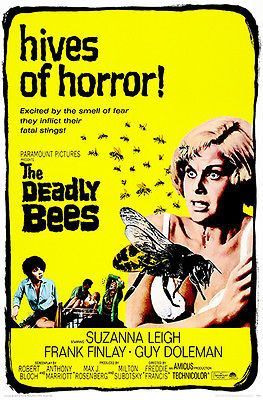 Given the fact that Hammer rival Amicus were behind this, not to mention the contribution of scriptwriter Robert Bloch and director Francis, I made sure to acquire it immediately when the opportunity arose. Unfortunately, the edition I ended up with not only featured the wrong aspect ratio (which noticeably lopped off the top of both the credits and, on occasion, the actors themselves!) but the image appeared stretched to boot (though I was able to fix this from my TV remote). I needn’t have worried excessively, however , because the film was hardly worth the trouble: I’ve watched the more famous and star-studded (but similarly maligned) ‘killer bees’ movie THE SWARM (1978) twice but, while this is somewhat less enjoyable (given the definite camp factor of the later outing) if certainly more tolerable at nearly half its length  THE DEADLY BEES ran for 84 minutes against THE SWARM’s excessive 155, at least in its “Extended Version”  it’s just as dull and generally misguided! Incidenatlly, yet another film on the subject was the made-for-TV THE SAVAGE BEES (1974) but I’ve yet to subject myself to that!

Anyway, this does feature a reasonable cast  led by a pretty if miscast Suzanna Leigh, Guy Doleman and Frank Finlay, while also including the likes of Michael Ripper (actually one of the Hammer stalwart’s bigger roles, if still playing nothing more complex than a bartender-cum-constable!), James Cossins and Michael Gwynne (in one brief scene); having mentioned Hammer earlier and again just now, it’s worth noting that Leigh, Cossins and Gwynne also did work for that famed horror studio at some time or other. For the record, the fashionable but rather queasy pop music background (highlighting Leigh herself) of the opening scenes includes the underwhelming performance by a band called The Birds(!) which numbered among its members future rhythm guitarist with The Rolling Stones Ronnie Wood!

The idea of Leigh’s character being sent to recover from a nervous breakdown on a remote island was pretty stupid to begin with  and it’s rendered even more comical (which I don’t think was the intention) by the fact that the farm in which she lodges is run by a middle-aged couple who can’t stand each other! One would have expected the essentially weak script (beekeeper Doleman, for instance, is depicted as generally boorish so as to obviously arouse audience suspicion  however, the casting of Frank Finlay as his sheepish neighbor, complete with sympathetic Cary Grant-type delivery, won’t fool anyone!) would eventually be compensated for by the appearance of the rampaging bees themselves; however, even these emerge to be so poorly animated as to dissipate any hoped-for tension during the relevant scenes  causing an air of dejection to hang over the entire film (apparently, Francis was so unhappy throughout the shooting that he considered retiring from direction altogether: happily for us horror film buffs, he didn’t)