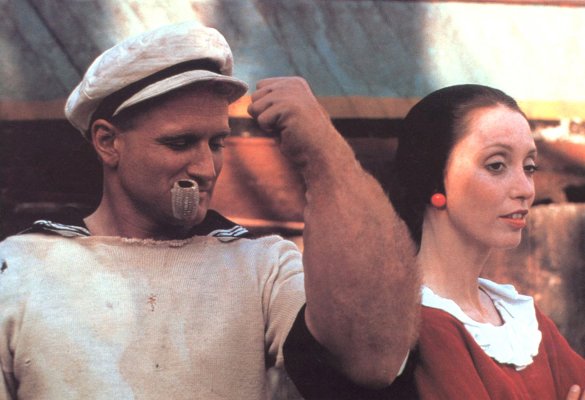 Any question as to whether there’s an audience for films based on comic books has been thoroughly thrashed by the box office bounty garnered by movies such as The Dark Knight ($1 billion worldwide), Iron Man ($585 million) and, most recently, the big screen juggernaut that is The Avengers (More than $400 million so far). What once were considered artistic and commercial gambles with a fairly narrow audience of aficionados and adolescents have proven to be a smart and savvy studio investment.

PARAMOUNT PICTURES/ASSOCIATED PRESS
Robin Williams starred as Popeye in the 1980 film based on the comic strip.
ADVERTISEMENT
It is, I suppose, no surprise. After all, comic books, like movies, are built around the idea of long-form visual storytelling. Popular characters are often elevated to mythic proportions and the rapid pace and eye toward action make them natural film properties. Comic strips, on the other hand, are another story.
Although filmmakers have long striven to exploit the built-in audience newspaper comic strips enjoy, the results have, by and large, been uneven and forgettable. I hold up Garfield as Exhibit A. There are exceptions. While not all of the movies listed below can be considered commercial or even critical successes (a few were neither), each serves as a tribute to both mediums – the printed strip and the movies.
DICK TRACY (1990): An audience would be hard-pressed to find a more obsessive adaptation than Warren Beatty’s Prohibition-era detective tale. Every frame is shot in vibrant primary color and the heroes and grotesque rogue’s gallery of villains are written in moral black and white. The result is a movie that seems at once an affectionate throwback and a fever dream from somewhere far in the future.
POPEYE (1980): Director Robert Altman understood that the essential elements of Popeye have little to do with spinach and the occasional fistfight. Instead, it’s the salty sailor’s surrealist textures and text that elevate it from the veggie-based conflict resolutions we all remember. The resulting film embraces the oddball world of the original strip, and in doing so, produces a completely immersive environment. The movie regularly, and unfairly, gets a bad rap.
PRINCE VALIANT (1954): If ever there were a comic strip ripe for adaptation, it’s Prince Valiant. The stories of the heroic prince theoretically spin off of Arthurian legend, but the truth is the complicated narratives, told three frames at a time, are of a style unique in literature and comic strips. This version of the Valiant story, starring Robert Wagner as the hero with a bob cut, is a wonderfully overwrought slice of epic 1950s cheese.
FLASH GORDON (1980): There is no room in comic strips for subtlety. Readers need to be constantly and consistently engaged. The makers of this big-budget B movie understood that. There’s no metaphor or subtext. It’s all over-the-top action and big moments that lead, quite appropriately, into bigger moments. Is it silly? Of course. Is it worthwhile? I’d like to think so.
ANNIE (1982): To be fair, the stage musical did a lot of the heavy lifting in terms of finding a way to string the origin and adventures of the oddly eyeless orphan into a cohesive whole. But master director John Huston was able to give his screen adaptation not only a certain measure of old school musical charm, but also the epic sweep of a proper period piece. Little girls can be a tough audience, and there’s not one that can deny the charms of this movie.