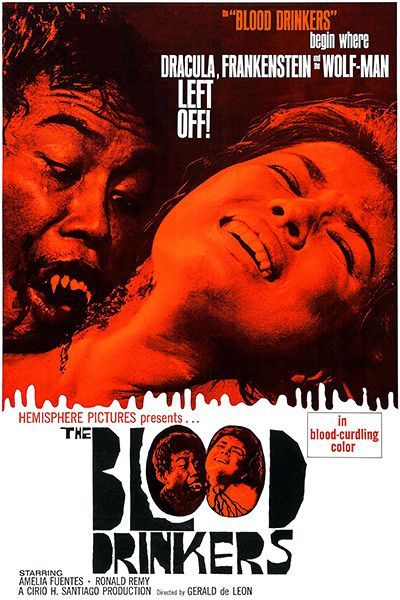 An evil genius vampire whose minions include a hunchback, a midget, a hot chick with sunglasses, and a rubber bat tries to save the life of his vampire lover by transplanting her with the heart of her long, lost sister. The sister, inconveniently, is still alive. Plays at times like an Ed Wood movie, at others like a classic, albeit low-budget, horror film. Made in the Philippines, which lends jungle atmosphere, interesting architecture, and enough catholic iconography to satisfy the Pope. Badly dubbed in English, including the fact that three completely different characters are, evidently, supposed to be mute and make the exact same, “Uhn, uhn, uhn,” noises in the exact same voice, which is blissfully confusing. Features one singing cowboy scene, Captain Kirk-style martial arts, and a musical score that sounds like it could be library tracks but nonetheless is very effective. The film is sometimes black and white, sometimes color, and sometimes tinted a garish magenta, which actually works to heighten the atmosphere at least part of the time. Anyone who has read this far and is still interested will not be disappointed.