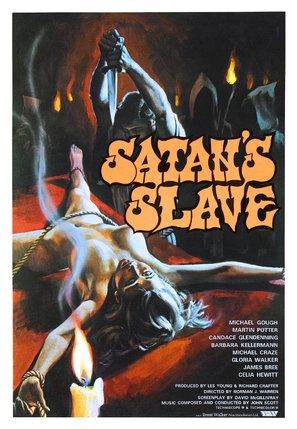 Perhaps because of the success of ROSEMARY’S BABY (1968) and THE EXORCIST (1973) and, to a lesser extent, THE OMEN (1976), the 1970’s were a time in which the genre of horror in film was saturated with movies about evil Satanic cults, demonic possession, and incarnations of the big cheese Satan himself. Dozens, if not hundreds, of very low-budget movies revolving around this theme were made in the western world during this era, some with more success than others. It is within this period that SATAN’S SLAVE (1976) was made as a pleasant little contribution from England. While the budget is not as microscopic as that of some of its peers, this flick did not have the sort of funding possessed by the more successful examples of the genre.

This movie is not, by any stretch of the imagination, the worst of its type. It has a reasonably interesting story, attractive characters, at least one sleazy psycho guy, and plenty of nakedness and blood. Since its about an evil Satanic cult, there’s also a few cool ritual scenes with daggers and baphomets and robes, along with an attractive young blonde being offered up to the dark lord. What more can a viewer ask for, right?

One of the coolest parts of this movie is the opening sequence, if only because of the eerie off-key piano music and bizarre artwork–there was a certain look attributed to Satanism in the 1970’s, and this movie definitely gives the audience that feel. It then transitions to an outdoor scene with a bunch of goat-headed cultists performing the sacrifice of a naked blonde woman upon the altar for the generic reasons that Satanic cults typically do such things in movies of this nature.

From there, we are introduced to Patrick Bateman’s wealthy British counterpart, Stephen Yorke (Martin Potter), who romances a young woman. Things are going well for our anti-heroic psycho and it looks like he’s about to score a bit of crumpet (if you know what I mean) when suddenly his companion changes her mind for some inexplicable reason. He isn’t about to give it up, however, and suddenly clothes are torn and rape seems almost imminent. She does flee the immediate scene, only to have Stephen smash her skull in the doorway before she can exit the manor.