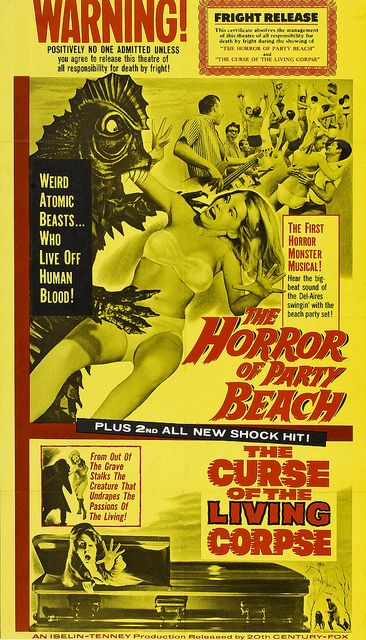 no this movie isn’t scary. no it isn’t well made, but it’s still a hoot to watch. it’s like plan9 from outer space only funny. plan 9 is incredibly boring to watch as far as b-movies go. horror at party beach on the other hand, is so silly it’s hysterical. imagine the creature from the black lagoon with a bunch of hot dogs protruding from it’s mouth and you kind of get the idea. the creatures talk a kind of deep gurgling “hahroo” language sort of like the sound godzilla makes. while the monsters are kind of silly, the background music give the film a slightly unsettling edge like the friday the 13th “killkillkill chewchewchew” theme.

to it’s credit, as bad as the movie is, the birth of the creature is kind of well made for such a low budget film. the makers did stop animation on a skeleton where they added clay a little at a time to build the sea monster. at one point, when the monster gains eyeballs, they roll around. for such a low budget flick, it’s kind of a creepy touch as is the score. the music from the film, not the beach party rock and roll mind you, is some of the best ever from a 1950-1960 b-movie. in fact, the music was used in an anti-acid commercial back in the 80’s. it might have been pepto bismal. if you watch this movie, you’ll need it ironically enough.

if you’re a fan of cheesy b-movies, horror at party beach is one of the best of the worst. with better actors and production values, it might even have been a decent movie as it has a couple of good ideas. if you only see it once, you’ll probably never forget it. i haven’t seen it for more than 20 years, but it’s still burned in my memory. i can’t say that about some big budget films i’ve seen only a year or two ago.