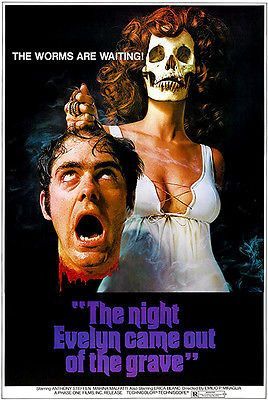 Nice mix of giallo an Gothic horror, brought to you by Emilio Miraglia, writer/director of Red Queen Kills 7 Times. Maybe Miraglia likes red, as this is a tale of a dead red-headed wife, and a series of red-headed prostitutes brought home by the rich widower, Lord Alan Cunningham (Anthony Steffen).

Not only does Alan bring a lot of redheads home to his castle, which means a lot of flesh for your enjoyment, but he has a propensity to engage in a little sadism while he is at it, as Susan (Erika Blanc) finds out.

After Susan, he meets Gladys (Marina Malfatti) at a party. He is instantly attracted (and who wouldn’t be?) even though she is a blond, not a redhead. So much so, that he asks her to marry before he even gets her in bed. She is much more practical, and goes to bed without marrying, though I suspect she feels it will lead there eventually.

When they are married, the title comes alive as does Evelyn, his first wife. Naturally, I suspected Albert (Roberto Maldera) and Aunt Agatha (Joan C. Davis) in this ruse, but that is quickly dispelled. Needless to say, the foxes didn’t have any appetite for breakfast after a late night snack.

Things move forward with a double double cross and a surprise ending.