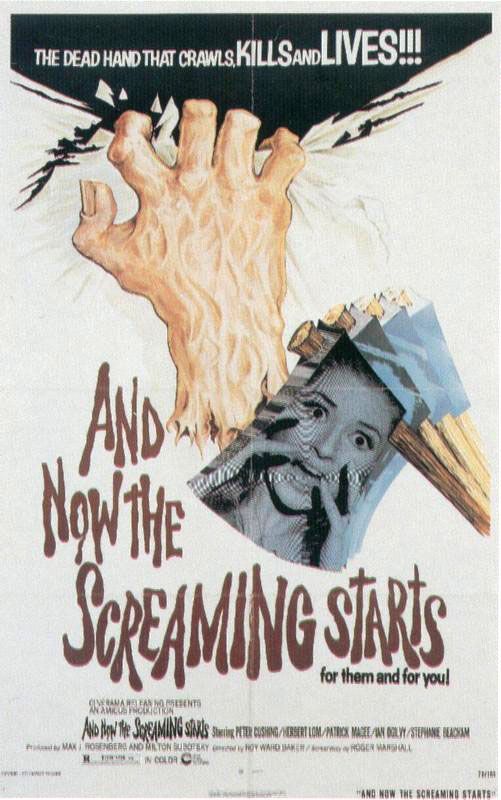 There was something of a vogue for horror films in Britain during the sixties and early seventies, probably because there was a market for material of this nature but censorship meant that it could not be shown on television. Hammer were the best-known film production company of the British horror boom, but they had a number of rivals, and this film was made by one of these, Amicus Productions. Amicus were best known for “portmanteau” films like “Tales from the Crypt”, generally with a contemporary rather than a period setting, which meant lower production costs. “And Now the Screaming Starts!” is one of their few attempts to invade the Hammer territory of a single feature-length story set in the past. It even features one of Hammer’s best-known stars, Peter Cushing.

Despite the rather jokey title, complete with exclamation mark, this is not a horror spoof along the lines of “Carry On Screaming”. Nor, despite the presence of Cushing in the cast, is it a Transylvanian tale of vampires and werewolves. It is rather a Gothic ghost story reminiscent of the work of M R James, although more sexually explicit than anything James would have been allowed to write. The action takes place in the year 1795. A young married couple, Charles and Catherine Fengriffen, move into the stately home of the Fengriffen family. At first the marriage seems a happy one, but soon Catherine is troubled by strange dreams and visions, all of which seem to be connected with Silas, the mysterious and sinister woodcutter who lives in a cottage on the estate, and a portrait of Charles’s grandfather, Sir Henry. She comes to believe that the house is haunted and that there is a curse on the Fengriffen family. Several people who try to help her meet mysterious deaths. Eventually Charles admits to Catherine, who is by now pregnant, that there is a legend of a family curse, connected to a terrible crime committed by Sir Henry.

Despite his being the most established star among the cast, Cushing’s part is a relatively small one; he plays a doctor brought in to try and cure Catherine of what her husband believes is a mental illness and fulfils that common role in horror films, the rationalist sceptic whose scepticism is inevitably proved wrong by events. Cushing is, however, very good in his role, and there is also a good performance from Herbert Lom as the cruel and debauched Henry, whose crime is seen in flashback. Stephanie Beacham was previously best known to me as Sable in that “Dynasty” spin-of “The Colbys”, but here we get to see just how strikingly beautiful she was as a young woman.

Some of the productions of the British horror cycle could be awful, and Cushing, although a talented actor, often found himself cast in the worst of them. (“The Blood Beast Terror” from 1967 and “The Satanic Rites of Dracula”, also from 1973, are two particularly dire examples). “And Now the Screaming Starts!”, however, is one of the better ones. Its plot may be far-fetched, but all films in this particular genre require a large amount of suspension of disbelief on the part of the viewer, and director Roy Ward Baker, who in the latter part of his career tended to specialise in horror, is able at times to conjure up a quite genuine sense of terror. Moreover, some of the most powerful scenes are those seen in flashback, and here no suspension of disbelief is needed. Ghosts may or may not exist; men as depraved as Sir Henry undoubtedly do, which from my point of view makes them far more frightening than any ghost. This is a highly watchable film, especially when seen late at night. 7/10

A goof. The Fengriffen mansion is built in the Victorian Gothic style, quite anachronistic for a film set in the late 18th century. The actual house used, Oakley Court in Berkshire, was in fact not built until 1859. The film-makers, however, clearly felt that Gothic architecture was much more in keeping with the mood of a horror film than Georgian classicism would have been.