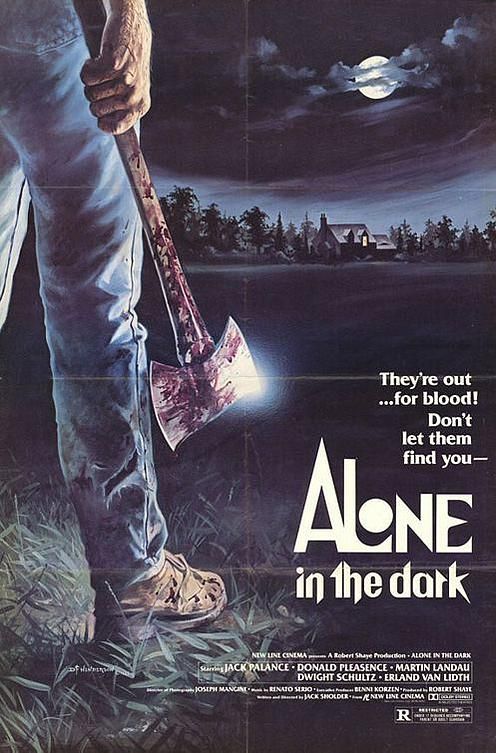 The debut film of B movie director Jack Sholder, and one of the first films from New Line Cinema, is this highly entertaining and strikingly intelligent little thriller.

When the power fails in a New Jersey community, four murderously insane men walk out of a mental facility and head for the home of their new doctor!

Although it was lost among the numerous slasher films of the early 80’s, Alone in the Dark is one of the smartest killer thrillers of the genre. Sholder delivers an above-average story all the way. He has one especially bizarre opening sequence, then follows with a plot that grows more intense through out. The film builds to a great claustrophobic climax, and then a memorable (and some what humorous) conclusion. The story packs some solid suspense, heated violence, and the occasional good jolt. One thing that really sets this tale above that of the average slasher flick is the fact that the films characters are believably well-rounded and even quirky at times. Yet another unique element of this story is the fact that it has a splendid kind of dark humor toward the idea of ‘mental health’. It’s almost a satire on the subject. Sholder’s direction is quite good, giving some tight action sequences and well-timed shocks. Also good is the unique music score of Renato Serio.

Another thing that sets this film above the norm is the wonderful cast which includes a number of veteran actors. Jack Palance is excellent in his role as the leader of the crazed villains. Donald Pleasence is a welcomed trip as a ‘different’ kind of psychologist. Martin Landau makes for a perfectly creepy madman. The supporting cast, namely Dwight Schultz, are great as well.

Alone in the Dark is an outstanding slasher-thriller. For those seeking a slasher movie with a brain, it’s a perfect choice.