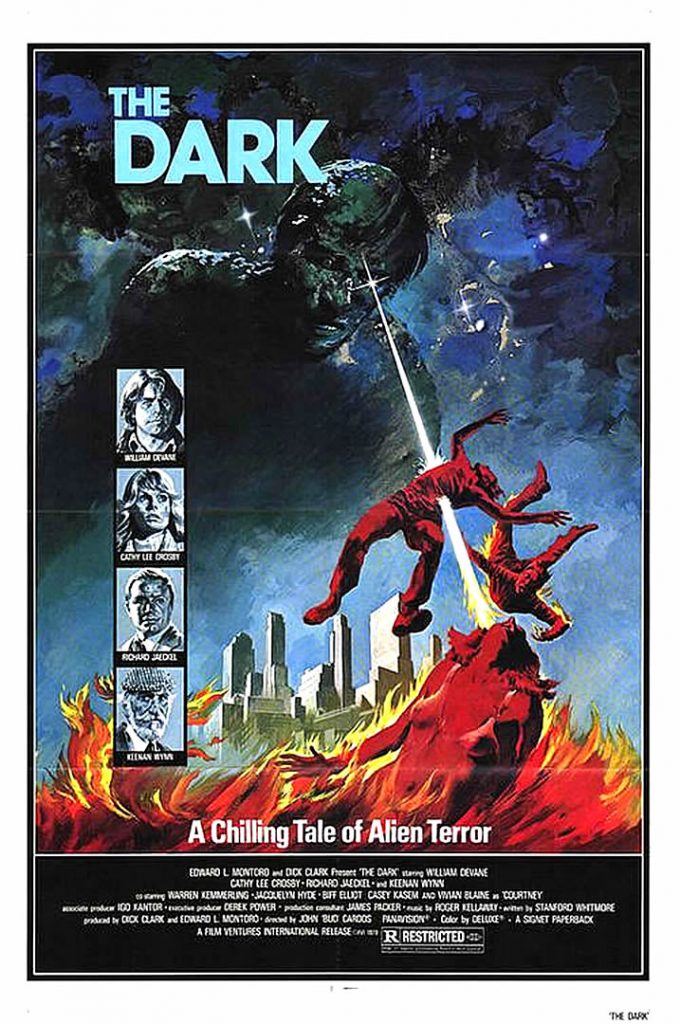 A former convict turned reporter (William Devane) sees that his daughter has been brutally mutilated so he sets out to try and find the killer as does a detective (Richard Jaeckel) working the case. It turns out that a space alien has landing on Earth and is doing the brutal murders.

THE DARK has an interesting production history that is actually a lot more interesting than the film itself. Originally Tobe Hooper was to direct this film and he got several days into the production when he either quite or got fired. The somewhat notorious John ‘Bud’ Cardos took over the production and the end result is a rather tame sci-fi picture that’s biggest problem is the fact that it lives up to the title.

I say that because this film was shot way too dark and often times you can’t even tell what’s going on. I mean, I’m all for movies keeping the monster in shadows and what not but the problem here is that whenever the alien goes on the attack it’s so dark that you can’t see anything. Or, at least, you can’t see anything too clear. The other big problem with the picture is the fact that it drags so slowly that the 90-minute running time seems double that. There are non-stop scenes of people talking and fighting yet none of it is very entertaining.

It’s really too bad that the film is so lame and doesn’t feature that good of an alien or gore effects because the cast is actually pretty good. Devane is always worth watching and he turns in a nice performance here. Jaeckel is also very good in his role as is Jacquelyn Hyde and Keenan Wynn in their small roles. You can also look quick for Casey Kasem and Vivian Blaine. Who knows what might have happened with the film had Hooper stayed on but as it stands, THE DARK isn’t a very good movie and it’s not nearly the best “alien run amok” movies from this period.