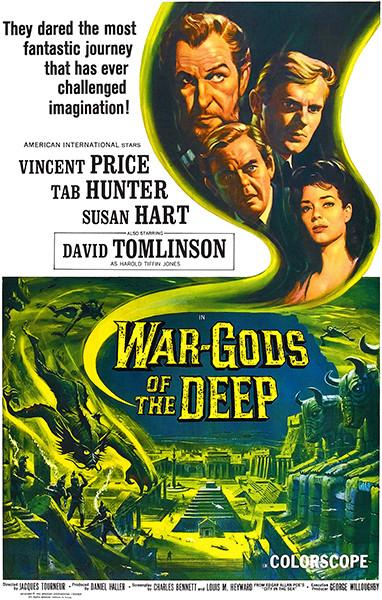 When you consider that this movie is directed by the great Jacques Tourneur, stars the legendary Vincent Price and is based on a poem by the master of the macabre, Edgar Allen Poe; it’s a huge disappointment. Considering the quality of the talent involved, this film really should have been a lot better. However, despite the fact that it’s a long way from brilliant, the film isn’t bad either and fans of any combination of the three major players will no doubt find something to like about it. The film begins in familiar Poe and Price territory, with the great actor reading the beginning of the poem on which the film is based against a backdrop of the ocean hitting the sandy shores. The story follows two men that follow a group of fish-men down a back passage of an old in house in search of the girl that the monsters have kidnapped. The men follow them to a lost city that has been engulfed by the sea, and discover a world of intrigue as they learn about the society of never ageing smugglers that they have stumbled upon.

It’s the story telling aspect of the story that makes the film struggle. It’s very uneven, and huge chunks are spent on rather boring elements such as an extremely overlong underwater chase sequence. However, when the film is good, it’s very good. Vincent Price delivers a great performance as the ruler of the underwater kingdom. Price is an absolutely great actor who has to prove nothing to nobody and one reason for that is because no matter how bad the film is, Vincent Price always gives you a reason to watch. The effects are a little silly, especially when you get to see the half-fish, half-men up close, but things like that add to the charm of classic B-movies, and so it’s easy to let it go. The story itself is very good, and despite the fact that it’s only a poem, Poe manages to inject all the malevolence that has made him immortal in the eyes of everyone that knows anything about literature. The film also includes a tribute to the great author by way of a section which includes a first edition of his works. This film certainly isn’t brilliant, but it’s not bad either. I certainly recommend it to fans of Price, Poe or Tourneur.