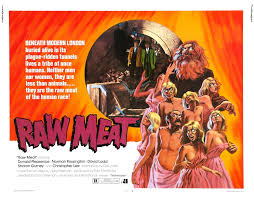 One of the most affecting films I have ever seen, Death Line is one of the most intelligent and bold horror films ever made. The opening scenes of a wealthy and dour civil servant stalking clip joints in Soho sets the tone for a grim and seedy, but very accurate portrayal of life in 70s London. No-one talks to each other, on or off the underground, everyone is miserable, even the young student lovers have a fairly rocky relationship, the man being totally lacking in compassion. The use of the genuine ghost stations of the London Underground is an excellent idea, and even if the storyline is ludicrous, it is handled with far more depth trhan your average slasher movie. The killer is a tragic figure, and the scene where his beloved finally dies is shocking and heartbreaking. The special effects are nothing short of repulsive, with particular attention being paid to the sound. It revels in gore and depravity, unflinching but not exploitative. It runs like a modern day legend, working on so many levels. The only thing which spoils the film is Donald Pleaseace hamming it up shamelessly in a badly characterised role which tries to offer comic relief but is simply irritating and unpleaseant. Look out for a remarkable tracking shot in the creature’s lair early on, and a lovely touch with the students enquiring about a book on Poltergeists, more a mood device than anything to do with the plot. Seeing this is a cinema would certainly put you off your popcorn!