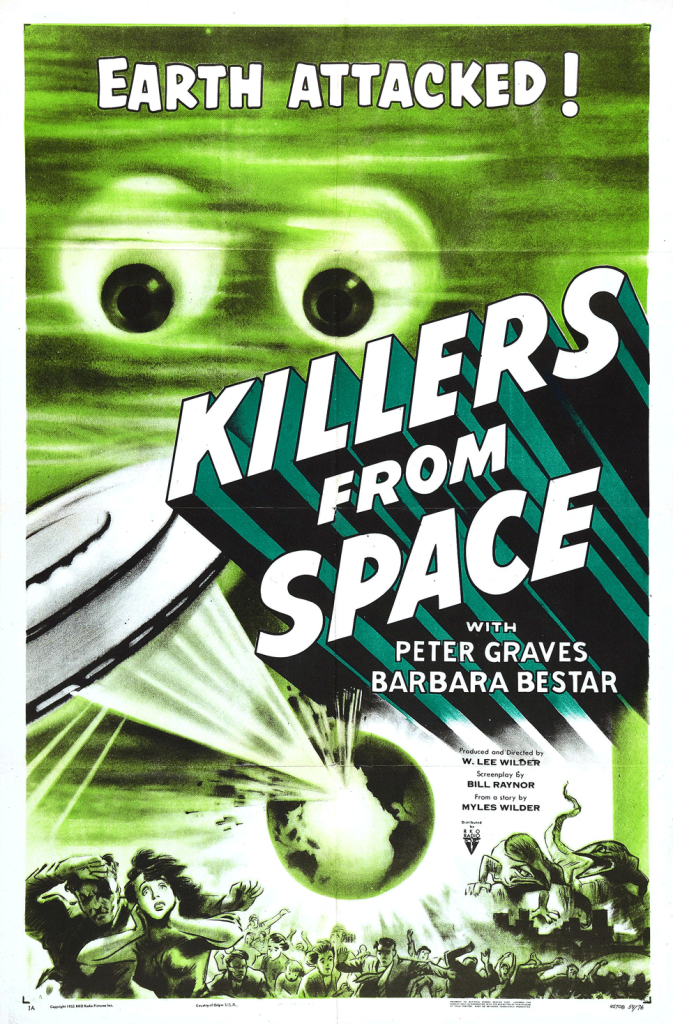 This film is wonderfully cheap, awkward, and earnest. The director has a few successful scenes where a creepy mood is achieved, and there is a kind of plausibility throughout if one is able to accept the concept of an entire universe contained on studio back lots with virtually no money. I don’t know why, but the scifi and horror films of this cheap, primitive, paranoid era were more fun than those made nowadays.

Besides its innate aesthetic value, this film is notable for an early featured role for the great Peter Graves, who died about a month prior to me writing this review. Mr. Graves’ performance here is certainly not Oscar-worthy, but if one imagines the circumstances under which this film was undoubtedly made, he acquits himself well.

Another noteworthy thing: this film features a storyline in which alien space travelers abduct a USAF pilot and perform mysterious and creepy surgery on him, leaving him with a strange scar and the gap in his memory that ufologists call ‘missing time.’ Missing time and secret alien medical procedures have become a cliché of modern UFO mythology, but this is the earliest film I have seen to feature these concepts.

The aliens are bug-eyed creatures who dress in outfits of uncanny similarity to the costume worn by 1930’s newspaper comic strip hero ‘The Phantom.’ Their base of operations is a typical low-budget movie cave of the type favored by the villains in Republic chapter-plays, and their equipment looks mostly like various disemboweled floor-model radios and old DuMont TV sets. Despite the limitations, the scenes containing these elements are the most effective in the film.

Lovers of old-school, low-budget scifi and horror will likely enjoy this film, although perhaps not to the degree I did. Nonetheless, it is certainly worth a look if are the right type of aficionado.