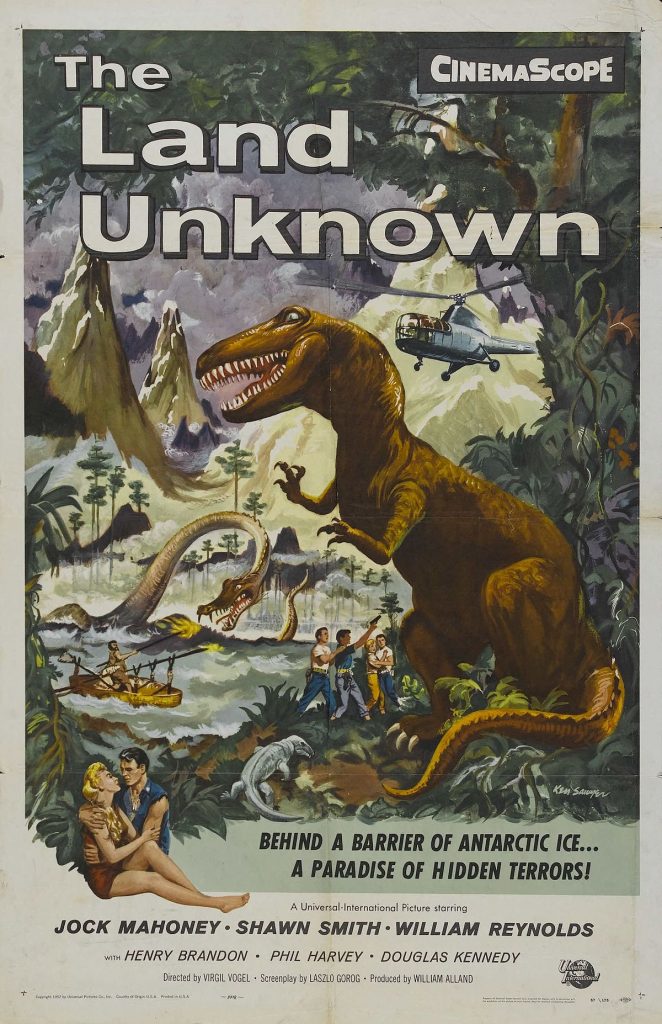 Long before I ever knew about the existence of “The Land Unknown”, I had already seen clips of its legendary T-Rex in various TV-shows spoofing bad movies and even wannabe funny commercials promoting the strength of cornflakes. It was like THE archetypal bad ‘man-in-a-suit’ monster that supposedly had to look ferocious but actually couldn’t even fright the smallest child. Granted, the T-Rex looks ludicrous and pitiful, but bear in mind the movie remains a product of the 1950’s and  in fact  the T-Rex is the only truly weak element in an overall decent and spirited little Sci-Fi effort. “The Land Unknown” also boosts an adequate screenplay, solid performances and direction and a couple of other and far more successful monster designs, including a Pterodactyl and some kind of Dino living underwater. Heck, the imaginative photography even manages to make smaller and “harmless” animals like iguanas and lizards look menacing. The story revolves on a scientific expedition heading for the continent of Antarctica to investigate why it could possibly have warm-watered seas and lakes amidst all the mountains of ice. A four-headed crew, one woman and three men, become trapped in a sudden storm and their helicopter lowers down a crater, far out of reach of all the headquarters’ radars and search parties. For nearly 30 days, they are stuck in a subtropical landscape far below sea level and  even more astonishingly  where times didn’t evolve and dinosaurs still prowl around. As paranoia amongst them rises and the hope for rescue lingers, the team faces the biggest ordeals in their lives. Okay, so “The Land Unknown” is rather tacky and often tedious, but it’s undeniably charming and the opening quarter is even somewhat educational, with actual footage of the historically fundamental Admiral Byrd expeditions. The footage inside the crater and amongst the dinosaurs is obviously very grotesque and implausible, but hey, so was “Jurassic Park” and yet everybody loved that. Worth watching, but probably not for nowadays Sci-fi target audiences.